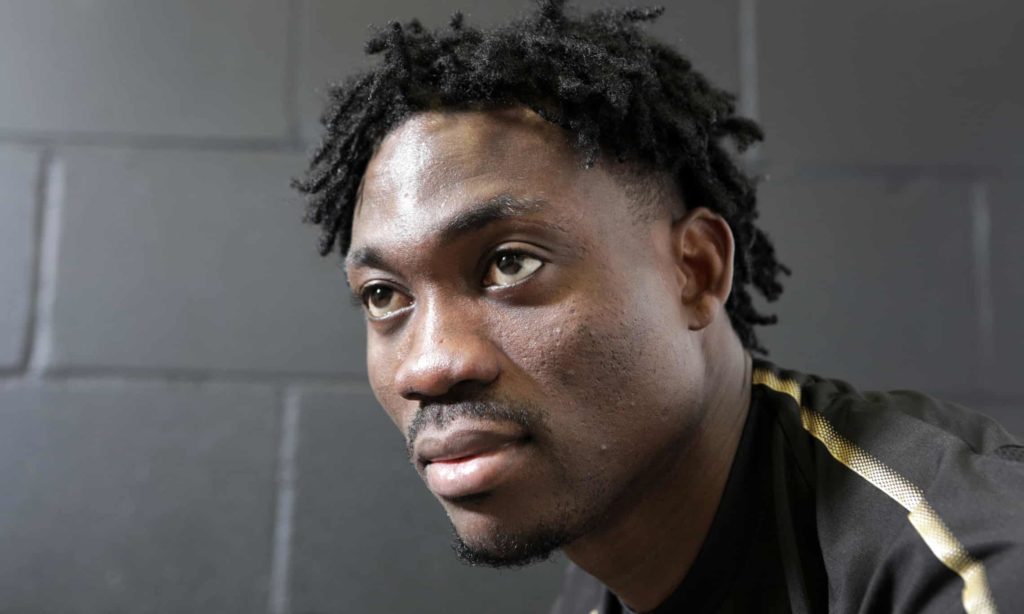 Christian Atsu donates regularly to Arms Around the Child, a charity that helps children in Ghana. Photograph: Gary Calton/The Guardian

It is a very long way from Ghana’s Ada Foah to Hillsong church on Newcastle’s Westgate Road – and not merely in miles. Christian Atsu has made that transformative journey, swapping an existence as one of 10 children whose late father eked out a living fishing and farming on the junction of the Volta River and the Atlantic Ocean, for a new life on Tyneside.

Almost everything has altered but one constant remains: the Newcastle winger’s Christian faith.

Church was a central part of Atsu’s childhood and worship at Hillsong, a short walk from St James’ Park, binds the Ghana international to his new habitat.

''I’m very happy at Hillsong and very happy in Newcastle,” he says. “Football changed my life completely; sometimes what’s happened seems like a miracle but it’s enabled me to help my community and my family.

''My faith is the most important thing in my life. I know I’m one of the lucky people God has blessed. I’m very lucky and privileged to be in this position. I had nothing and now I’ve got too much so I have to give something back.''

If Atsu’s wing play and subtle left foot can sometimes constitute a slightly underrated element of Rafael Benítez’s team, he is an undoubted star across his home continent. After winning the player of the tournament and goal of the tournament awards at the 2015 Africa Cup of Nations in Equatorial Guinea, he is someone people from Cairo to Cape Town take notice of and this prominence helps promote Arms Around the Child, the charity that counts him as a key ambassador.

Based in Ghana, South Africa and India, it provides homes, protection, education and support for children who have been orphaned, abused, affected by HIV/Aids, trafficked, sold or live in child-headed households.

''I donate often, so they can buy food and stuff,'' says Atsu, who vividly remembers sharing a cramped bedroom with his mother, twin sister – now a nurse – and four other siblings. ''At the moment we’re building a school in Ghana. About 300 children will attend, I want everyone to have the chance of education.''

He himself benefited from an excellent schooling provided by Feyenoord’s African academy in Accra and possesses the poise and articulacy to prove it. ''I survived but I don’t forget,'' reflects the 27-year-old whose education equipped him for the culture shock of moving to Porto as a teenager before a switch to Chelsea, where Atsu became one of the club’s sometimes almost invisible “loan army”.

He signed for Newcastle without playing a first-team game for his former club – although he was borrowed by Vitesse Arnhem, Everton, Bournemouth and Málaga. ''I don’t regret going to Chelsea – it was a privilege to be their player,” he says, firmly. “And, eventually, it led me to Newcastle.''

Atsu, his wife and their two small sons enjoy life in the city with its easy access to Northumberland’s magnificent, sandy beaches – the only downside being that the temperatures tend to be considerably cooler than those on the palm-fringed equivalents he grew up alongside in Ada Foah. “Wow, wow, wow,” he says, eyes widening, when told about past Sunderland teams being made to swim in the North Sea.

He is sitting in a centrally heated room at Newcastle’s suburban training ground but Atsu seems to shiver involuntarily at the idea. “That would be impossible for me,” he says. “My family and I love it here but, even when I go to the beach in the summer, I dare not go in the sea!”

Fortunately Benítez is not big on macho squad-bonding exercises. “Rafa’s like a father,” Atsu says. “He encourages me almost every day. Tactically Rafa’s very detailed but he’s not just about tactics and coaching. He’s very good at the human side of management which is so important.

''Everyone here finds Rafa warm. If you have a problem you can go and speak to him, you can talk to him about anything. He keeps pushing everyone in training every day; he teaches you how to be a professional on and off the pitch.''

The only cloud looming on the horizon is Benítez’s reluctance to extend a contract ending in May. ''It’s very important Rafa stays,'' Atsu says. ''Newcastle’s a big club and Rafa’s a great manager, one of the best in the world, one of the few to have won the Champions League. He’s great for this club, with him here, big players will come to Newcastle and we can win trophies.''

First Benítez’s team must win their latest relegation fight and the home games against Huddersfield on Saturday and Burnley on Tuesday.

''Every point’s very important for us now,'' says Atsu, who believes an amalgam of the squad’s recent training camp in southern Spain, a late January home win against Manchester City and the arrival of the £21m record signing, Miguel Almirón – who should make his home debut on Saturday – can ensure survival.

''The team’s confidence has lifted,'' he says. ''Miguel’s very good technically, very quick. We’ve always been very difficult to break down but Miguel will give us something different.''

Atsu will be somewhere different this summer when he is scheduled to head for Egypt and the Africa Cup of Nations. “One of my best times in football was Equatorial Guinea 2015,” he says. “Through that tournament a lot of people in Africa now recognise me.”

Much as he is looking forward to boarding Ghana’s flight to Cairo, the anticipation is tempered by the knowledge that Egypt’s once strong Coptic Christian population is shrinking in the face of hostility and, sometimes, terrorist attacks from Islamic extremists.

''Some people are misinterpreting the Qu’ran,” Atsu says. “All religions have the same idea about loving your neighbour but what’s happening shows why it’s so important to educate our children properly. We have to teach them that everyone has to stick together and be one community.”

By way of emphasising that point he has recently been responsible for reuniting several impoverished families in Ghana after paying thousands of pounds in fines to release prisoners accused of petty offences.

The 62-year-old grandmother and her daughter freed after being jailed for stealing one pound’s worth of corn in order to feed their family is typical of the type of cases resolved, discreetly, by the winger.

Atsu may have “survived” and escaped but, all along that winding road from Ada Foah to Hillsong, there has never been a single moment when he forgot those he left back at home.