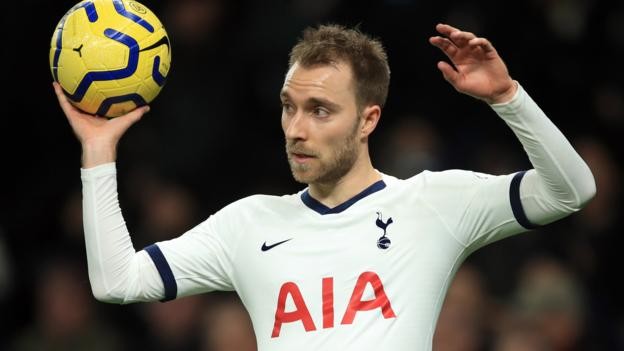 The Danish midfielder is set to travel to Italy next week to finalise a move.

Inter have been linked with Eriksen throughout January, but have not moved until late in the transfer window.

"Tottenham is the last one to blame for this situation," said Mourinho, who also revealed that the club will make Giovani lo Celso's loan move from Real Betis permanent this month.

Continuing on the subject of Eriksen, the Portuguese added: "I just want to say that this situation shouldn't happen on 25 January.

"The only thing I can say is Eriksen, since I arrive, he is behaving in a very, very professional way, with me and the team.

"But to be on 25 January in a situation like this is not nice."

Eriksen was left out of Tottenham's FA Cup fourth-round draw at Southampton on Saturday, but has been regularly involved during Mourinho's time at the club despite the speculation surrounding the 27-year-old's future.

The Dane, who said in June he was looking for a fresh challenge, is out of contract at the end of this season.

He came on as a second-half substitute during Wednesday's 2-1 Premier League win over Norwich, but was booed by some fans who have been unhappy about the Dane's supposed lack of commitment.

Argentina international Lo Celso, 23, joined Tottenham on loan last August, with Betis confirming to BBC Sport that the agreement includes an option to buy either in January or next summer. Spurs have taken up the option to buy in January.

"I think the boy is earning the decision," said Mourinho. "He is making it an easy decision for the club to execute the options.

"Incredible evolution since I arrived. By himself he made the decision that the club is going to execute the option."

Lo Celso has been more involved under Mourinho, having made only a handful of appearances under previous boss Mauricio Pochettino.

He has two goals to his name in 20 appearances this season.