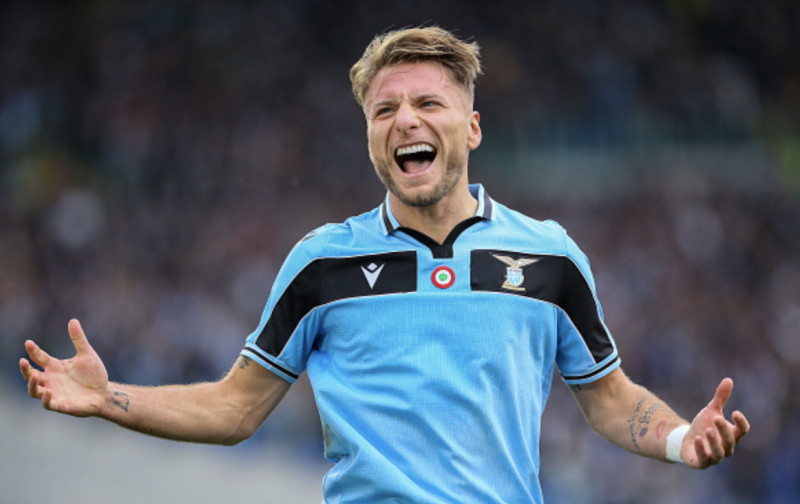 When that happens, and fans can get back to watching and betting on matches, there will be just one player to watch when it comes to the league’s tight and competitive title race.

That player is Lazio’s Ciro Immobile. His play when play resumes will decide what team takes home the Serie A title in 2020.

At the time Serie A was suspended indefinitely due to coronavirus, Lazio sat at 62 points, just one back of Juventus, who has 63. With 12 matches left to play, the race for the Italian title is shockingly close, considering that Juventus has won the Serie A title in eight consecutive seasons.

However, Lazio has turned it into a competitive race and should be considered a serious threat to snap the Old Lady’s run of dominance, especially since Lazio has a considerable goal differential age over Juventus, +37 compared to +26.

While there is plenty of credit to spread around for Lazio’s performance this season, Immobile is the player who has been the biggest difference-maker for the Rome-based club. The Biancocelesti run the perfect system to fit the talents of the speedy and skilled Immobile.

While being one of the top goal scorers in Serie A is nothing new to him, the 30-year-old is having a career year, scoring 27 goals in the club’s 26 games. He’s accepted for nearly half of Lazio’s goals in league play this season and needs just three more to double last season’s total.

Without him, Lazio would be just another team in Italy just hoping to sneak into a Champions League or even Europa League position in the Serie A table. But with Immobile, they are bonafide title contenders.

Even on the goals that Immobile doesn’t personally score, his presence and movement on the field help to create scoring chances for other players. He’s also chipped in seven assists to this point in the season, giving him the second most helpers on the club this season.

“I think he is the best striker in Europe right now, let alone in Italy,” says Immobile’s agent Alessandro Moggi. “Seeing Lazio so high up the table is not a coincidence, it’s down to hard work and director of sport Igli Tare has done a great job for several years using inferior resources to many other clubs, building a competitive team that is even challenging for the Scudetto.”

Needless to say, Lazio needs Immobile to continue scoring at such a high clip if they hope to keep pace with Juventus and ultimately overtake the giants of Italian football at the top of the table.

The Biancocelesti has just two players outside Immobile who have scored more than four Serie A goals this season. Ecuadorian striker Felipe Caicedo and Argentinian midfielder Joaquin Correa have combined for 15 tallies in league play, which is barely half of Immobile’s total.

If Immobile were to suddenly go cold following the coronavirus hiatus, it’s hard to envision Lazio scoring enough goals to win the league title, despite having the best defensive record in Italy.

Meanwhile, Juventus surely has no plans of going down without a fight. Maurizio Sarri’s team is built to win championships, given the incredible amount of talent in the squad. More importantly, Juve has its own talisman in Cristiano Ronaldo, who has scored fewer goals than Immobile this season but still strikes more fear into the heart of opposing defenders.

Even with Juventus still chasing Champions League glory and still alive in the Coppa Italia, they won’t merely concede the Serie A title just because they have a serious challenger.

That is why Immobile must keep up the same goal-scoring pace when play resumes for Lazio to have a chance. It’s largely on his shoulders if his current club is going to steal the Italian title away from the club with whom he began his professional career.

Immobile will also have the distraction of trying to match or break Gonzalo Higuain’s single-season Serie A record of 36 goals. The good news is that the closer Immobile gets to Higuain’s record, the better Lazio’s chances are of winning the Serie A title.

Of course, this isn’t exactly uncharted territory for Immobile. He was Italy’s top goalscorer during both the 2013-14 and 2017-18 seasons. On the other hand, he’s never earned that honor with Ronaldo playing in Serie A.

He’s also never done it with Lazio fighting to win a league title. Those circumstances surely add more pressure to what Immobile hopes to accomplish for both himself and his club.

While all of Italy will just be happy to have football back, Immobile will have the weight of the world on his shoulders. If you want to know whether it’ll be Juventus or Lazio to win the Serie A title in 2020, the player to watch is Immobile; if the goals keep coming, don’t bet against Lazio lifting the trophy.