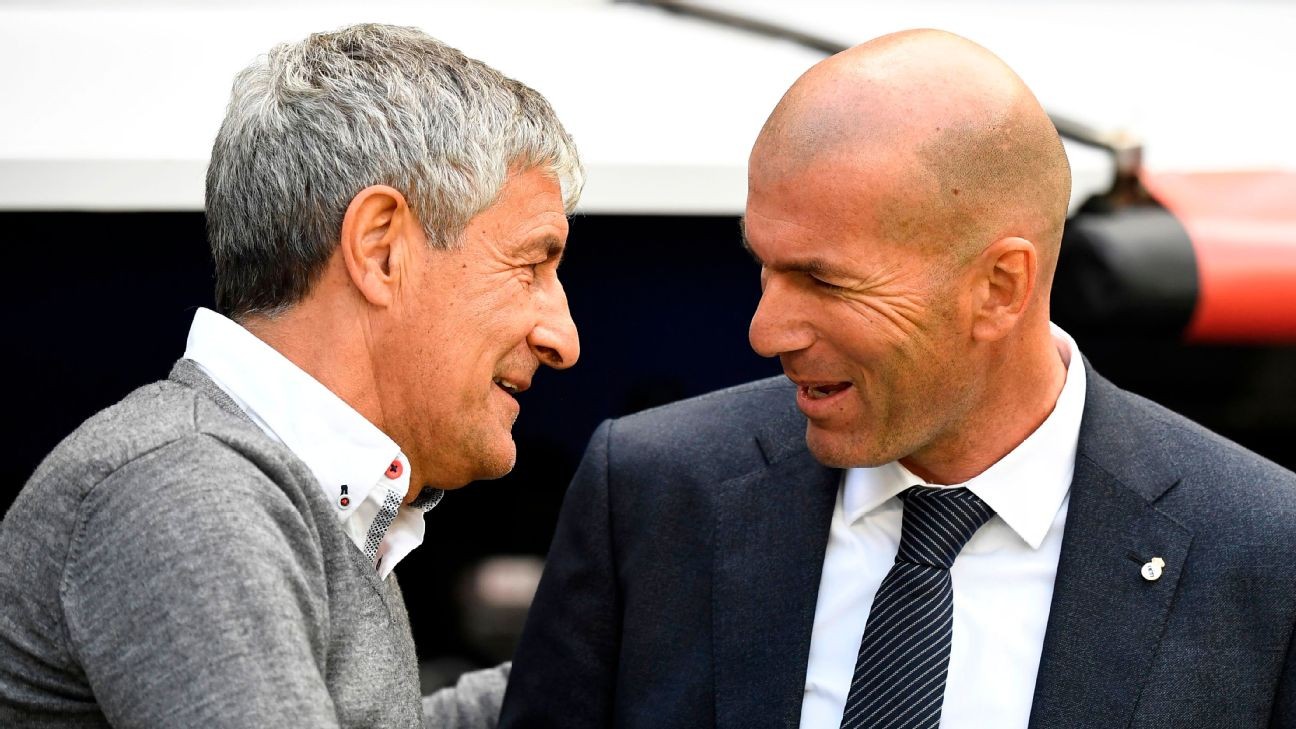 Sid Lowe examines how Barcelona's new manager is making an impact with the Catalan giants.

Barcelona coach Quique Setien has said the pressure is on Real Madrid when La Liga's top two meet at the Santiago Bernabeu on Sunday.

Madrid briefly led Barca by six points earlier in February but since then have been held at home by Celta Vigo and lost away at Levante. Barca, meanwhile, have beaten Real Betis, Getafe and Eibar to go into the Clasico with a two-point advantage over Zinedine Zidane's side.

"For Madrid, this is a vital game," Setien said at a news conference on Saturday. "It is much more important for them than for us in terms of the situation in the table. It is a key game for them, maybe not decisive, but really important.

"It could be an important day for us because a win extends our advantage, although I don't know if [five points] would be enough at this stage."

Zidane admitted his Real Madrid team are in "a delicate moment, because there are three games we haven't won at home" but denied Setien's claim of extra pressure.

"Every game is the same for us, they are all important," Zidane said when asked about Setien's comments at a news conference on Saturday.

"We know this game is different to the rest, but it is the same. We're at home and we'll do our best to win... It's a great opportunity to change things."

Barca have an impressive record at the Bernabeu, winning six of the last eight games between the two sides there, and another win this weekend would see them move five points clear in first place as they chase their ninth league title in 12 years.

Madrid's struggles in the league in recent weeks have also translated to the cup competitions. They were knocked out of the Copa del Rey at the Bernabeu, losing 4-3 to Real Sociedad, and on Wednesday were again beaten at home, this time 2-1 by Manchester City in the first leg of their Champions League last-16 tie.

"I don't trust form," Setien added when asked about Madrid's run of just one win in five games. "In these fixtures, the past is forgotten. What is rewarded is the present. This is a Clasico: two teams that will be at 100% regardless of the situation."

Setien, who at 61 will take charge of his first Clasico after replacing Ernesto Valverde in January, was present for Madrid's defeat to City in midweek and he was able to take some tips from coach Pep Guardiola after the game.

"I didn't go to see Guardiola, I went to see Madrid, but we did have the chance to talk a little bit," he said. "We spoke about different things. We saw the plan he designed for the game and how they executed it.

"There are things that City did that will work well for us on Sunday. There are other things that we cannot do or that do not interest us."

Setien confirmed that defenders Gerard Pique and Jordi Alba will both be fit for the game. Pique hurt his ankle in Tuesday's 1-1 draw with Napoli but was able to return to training on Friday.

Alba, meanwhile, has not played since straining an adductor muscle in the Feb. 15 win over Getafe, but returned to training earlier this week and has been cleared to travel to Madrid.

"I will decide on the day if he's fit to start," Setien said of Alba. "That's not the only doubt [about team selection] I have, though."

Barca will be without long-term absentees Luis Suarez and Ousmane Dembele, while Sergi Roberto is also sidelined with a thigh problem. New signing Martin Braithwaite, who made his debut against Eibar last weekend, is pushing for his first start for the club.