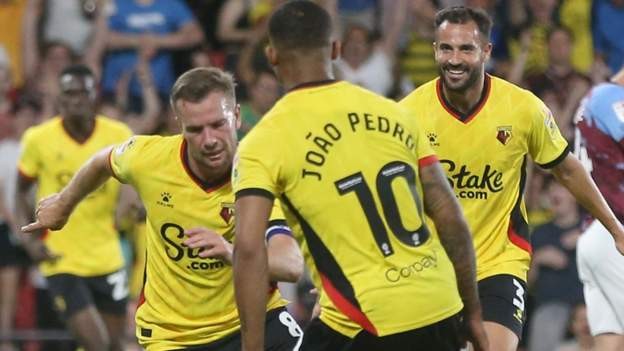 The hosts led with the game's first effort on target just before half-time as Joao Pedro's neat touch freed Ismaila Sarr, whose pull-back found Cleverley to side-foot into the bottom corner.

Josh Brownhill was twice denied by smart saves from Hornets goalkeeper Daniel Bachmann as the Clarets improved after the break.

The hosts lost full-back Hassane Kamara to a straight red card for pulling back Vitinho as he bore down on the penalty area, and Brownhill then turned the Brazilian's cross against the bar, but Watford held out.

Watford were without striker Emmanuel Dennis, who is in talks with Nottingham Forest after the clubs agreed a £20m fee for the Nigerian earlier on Friday, but move top of the table going into Saturday's matches.

Both sides went into the game having made the same start after relegation from the Premier League, following up opening-day 1-0 wins with a 1-1 draw.

And Watford boss Rob Edwards can thank a string of late saves from Austria keeper Bachmann - as well as the woodwork - for continuing his 100% Vicarage Road record.

Burnley boasted 70% possession from their opening two games under Kompany, and again had the lion's share of the ball in a feisty opening, but a misplaced pass from goalkeeper Arijanet Muric almost gift-wrapped an opening for Sarr.

Watford gave a debut to Hamza Choudhury, two days after his move from Leicester, and stepped things up after the mid-half drinks break.

And their improvement was underlined when Cleverley marked his 33rd birthday with a first goal since January 2021, before his celebrations - and match - were cut short by a knee injury picked up in scoring.

Kompany made a double change just after the hour, including a debut for winger Nathan Tella, little more than 24 hours after completing a loan move from Southampton.

Having won just two home games last season during their Premier League struggles, Watford have now matched that total just 12 days into their return to the Championship.

Josh Brownhill (Burnley) hits the bar with a right footed shot from the centre of the box. Assisted by Vitinho with a cross.

Josh Brownhill (Burnley) is shown the yellow card for a bad foul.

Dan Gosling (Watford) wins a free kick in the defensive half.

Attempt saved. Josh Brownhill (Burnley) right footed shot from outside the box is saved in the top right corner.

Vitinho (Burnley) wins a free kick in the attacking half.