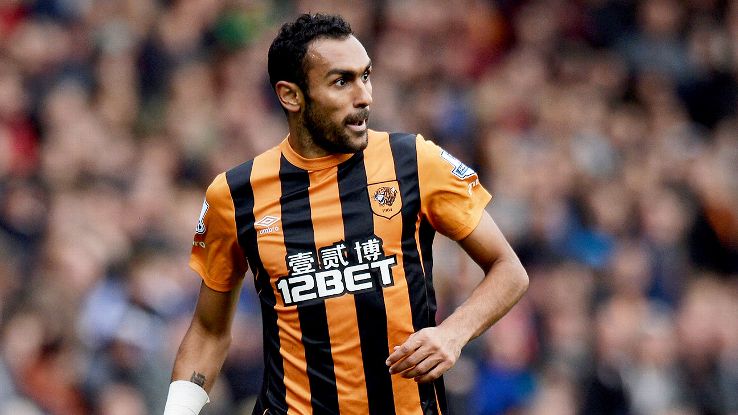 Hull City's Ahmed Elmohamady is not joining his Egypt teammates during the international break.

Never mind the chicken or the egg -- football's age-old debate about what comes first is "club or country?" Often the former takes precedence because it offers greater financial security than the latter, even though the allure of representing a nation seldom dims.

As a result, club obligations impact international matches and the latest effects will be seen at the 2015 African Nations' Cup (ANC) qualifiers.

Egypt are one of the worst affected. They are winless from two matches and will play a crucial home and away tie against Botswana over the next week, but they will have do so without experienced winger Ahmed Elmohamady.

The Hull City player pulled out of the squad after being injured during the weekend match against Crystal Palace and will need 10 days' rest,Â according to club administrators.

While ensuring their personnel are available to perform at their peak for all matches should be the priority of all teams, Hull may have chosen to focus on Elmohamady's fitness a little more than most because of his record of service to them.

Since January last year, Elmohamady has not missed a single game for them and has strung together 64 consecutive appearances. Their next match is an important one: against Arsenal in nine days' time, and considering Hull lost the FA Cup final to the Gunners last spring, they will want Elmohamady to be on target for that match.

As for Egypt, they will have to find a way to cope without Elmohamady, long-serving goalkeeper Essam El-Hadary and midfielder Hosny Abd-Rabo, and all of that with an axe hanging over their coach's head.

Shawky Gharib has been warned that if Egypt are not successful in the next seven days, the administrators will not hesitate to replace him with a foreign coach. Gharib will know that their threat is not to be taken lightly.

Sedki had overseen the club to a best-ever finish last season, when they ended second and qualified for the CAF Champions League, but memories proved too short in Alexandria to spare him his post.

At least Sierra Leone's coach, who has yet to be named following an internal row, should not have to fear the same thing. There are no great expectations on him and his team for their twin tussles against Cameroon because Ebola has wrecked the country.

Adding to that, there is the news that they will be without inspirational forward Kei Kamara, who could not be considered for selection.

Kamara's unavailability is not the cause of a club commitment but a club search. He is out of contract after his one-year stint with Middlesbrough ended and the contract was not renewed by mutual consent.

Kamara traveled back to the United States, where he made his name as a footballer, to search for a new club, even though the MLS transfer window closed on Aug. 6, which meant he was ineligible to play a game until the 2015 season.

Nonetheless, Kamara believed he would be better served not traveling with his national team because he may be needed "to be around in case of any emergency travels," as he toldÂ BBC Sport. As it turned out, his thoughts were a premonition of sorts.

Kamara traveled to Ohio earlier this week to sign with the Crew, which theÂ Columbus Dispatch reported on Wednesday. The team are the same side that made Kamara the ninth overall pick in the 2006 MLS SuperDraft.

Now that the deal is done, there may yet be time for Kamara to make at least the second fixture of his country's qualifiers. Even if that is all he can manage, in the position they are in -- bottom of the table -- his return will boost morale.

Kamara's commitment to Sierra Leone is undisputed and best explained in the fact that he continues to hold citizenship to the land he fled as a teenager, when he was a refugee.

But even someone with such close connections to their country is not immune to needing to put club ambitions first, and as ANC qualifiers continue, there may be more national sides experiencing the same with their own players and suffering as a result.