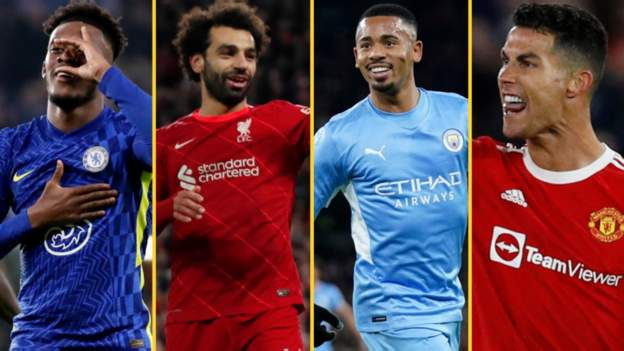 Chelsea are the holders, Liverpool last won the Champions League in 2019 while Manchester United's last triumph was in 2008. Manchester City are yet to win it

Liverpool, Manchester City and Manchester United won their respective groups, while Chelsea went through as runners-up.

The three English teams who topped the group are among the eight seeded clubs.

The draw for the Europa League knockout round play-off also takes place on Monday.

Here is everything you need to know about both draws.

How the Champions League groups finished

The draw is taking place at Uefa's headquarters in Nyon, Switzerland, with the 'ceremony' scheduled to start at 11:00 GMT.

Uefa's website is live streaming the draw, while the BBC Sport website will have text commentary and reaction.

The live stream on Uefa's website will appear on this link.external-link

Teams from the same national association cannot be drawn against each other at this stage.

That means the four Premier League clubs cannot meet, while teams cannot face opponents they faced during the group stage, either.

For example, Group A winners Manchester City will not be drawn against Paris St-Germain, who were runners-up in the same pool.

Manchester United and PSG could potentially meet in the last 16, which would put Cristiano Ronaldo and Lionel Messi - widely regarded as two greatest players of their generation - on a collision course.

When will the last-16 ties be played?

Seeded teams will be away for the first leg before being at home for the return matches. All kick-offs are at 20:00 GMT.

The draw for the quarter-finals is on 18 March.

What changes are there this season?

The away goals rule has been removed, so ties level after 180 minutes will go to extra time.

If the teams still cannot be separated after the additional 30 minutes then it goes to a penalty shoot-out.

When is the final and where?

St Petersburg, Russia, will stage the 2022 Champions League final, with the game scheduled for 28 May 2022.

How about the Europa League?

The draw for the Europa League knockout round play-off features 16 teams.

Barcelona, Borussia Dortmund and Sevilla are among those dropping down from the Champions League.

Rangers are among the seeded clubs, while Leicester City could feature depending on the outcome of the final round of games in Group C.

The Foxes are top of the group with eight points after five games. Napoli, who they face in Italy on Thursday, have seven points along with Spartak Moscow, while Legia Warsaw have six points.

West Ham, who entertain Dinamo Zagreb on Thursday, will not feature in this draw as they have already won their group with one game to spare.

Celtic, who have featured in this season's Europa League group stage, are dropping into the Europa Conference League.