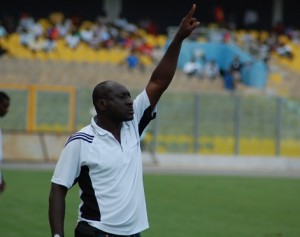 Abubakar Yusif has described the reactions of Asante Kotoko to his move to Medeama SC as misleading and unfortunate.

The Kumasi-based club through their spokesman Listowell Yesu Bukarson labeled the ex Hearts of Oak coach as a dishonest and greedy person for ditching them in favour of a more lucrative deal at Medeama after agreeing in principle to join 21-time Premier League champions.

This, the 42-year-old however says is not the true nature of events that unfolded.

â€œI never agreed in principle or even by word to become assistant coach of Asante Kotoko,â€ he exclusively revealed to GHANAsoccernet.com.

â€œI was presented with a contract which I asked to be given time to go through and all of the sudden I heard on the airwaves that I have been appointed assistant coach of Kotoko.

â€œEven my appearance at the clubâ€™s training grounds was a gesture out of respect to the Chairman (K.K Sarpong) who originally invited me to see my contract.

â€œTherefore I find it very unfortunate and misleading that the clubâ€™s spokesman (Bukarson) would come out with such a reaction considering he was nowhere near when negotiations were ongoing.â€

Last seasonâ€™s Premier League winner as assistant coach at Chelsea also revealed the club was made well aware of his decision not to sign the contract even before the Medeama deal was tabled.

â€œI told and explained my decision not to join Kotoko to one of the Board members who was very instrumental in my dealings with the club.

â€œSo it is never true that I only dumped the club upon being made aware of a more lucrative deal at Medeama, in fact my decision was communicated to Kotoko far before I saw the Medeama contract.â€