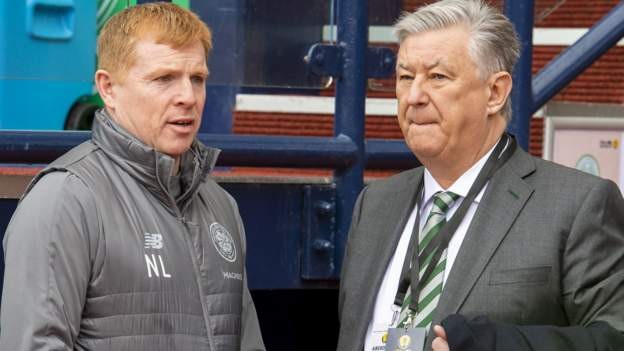 'I've been concerned about job for long time' - Lennon

Neil Lennon used a lot of words in a lot of different ways over the last week, defensively, conspiratorially and, finally, plaintively.

After drawing with Livingston in the snow of the Tony Macaroni Arena on Wednesday, the Celtic manager was asked what has happened to his previously all-conquering players. In that moment, he was lost for an explanation. "I don't know where they've gone," he said meekly.

In a week that brought an incendiary diatribe on Monday - a rant that was light on logic and heavy on victimhood - this was a quieter, more reflective and more sympathetic Lennon.

Confused and dejected, it was easier to feel for this version than the desperate character who thundered into a news conference two days before with the intention of going to town on the club's critics but only managed to shine the brightest spotlight on his own insecurities.

Those few words - "I don't know where they've gone" - told the story of Celtic's demise better than anything else he has said. There were no answers because he doesn't have any to give. He has theories, shots-in-the-dark explanations, but nothing more.

The dramatic, breakneck speed of Celtic's demise is as much of a mystery to the man at the heart of it as it is to all others watching from the outside.

No crisis but title may be beyond Celtic - LennonLennon agenda claim appalling, says SwinneyCeltic 'decimated by government rules' - Lennon

This is a totemic Celtic man laid low. A player, a captain, a manager, a winner of 10 leagues, eight Scottish Cups, three League Cups, a Uefa Cup finalist on the field, a conqueror of Barcelona off the field. The only person in the club's storied history to win domestic trebles on both sides of the touchline.

History will remember Lennon's contribution and record that pockets of it were played out against sectarian attacks, physical and verbal.

Not many people in Celtic's past have won more trophies and nobody has been subjected to the kind of poison in winning them that Lennon has. Knocked unconscious in Glasgow's west end, assaulted pitchside at Tynecastle, a suspect device in the post, graffiti on walls, bigotry pouring from stands.

He soaked it all up. People can't see the wood for the trees right now but the fact is Lennon is one of the most significant individuals in the entire history of the club. Down the line, when the smoke clears, him being the manager who lost the 10 in a row is only going to be a part of a much bigger story.

All good things come to an end and the end is certainly nigh for Lennon. It's not a question of if, it's a question of when - and therein lies a world of other points.

If Celtic were thinking straight, they'd have cut Lennon loose by now, in part because of the failings of his team but also in order to save him from the ugly spectacle that's been playing out these past weeks and months.

Silence from above is helping no-one

Lennon, despite his rich pedigree at Celtic, has become a targeted figure, a man subjected to viciousness and left twisting in the wind by a board that could initially be praised for backing him but can now only be criticised for letting him suffer on.

Lennon is the type of character who will fight until the last bell, who will refuse to give in despite being repeatedly put on the canvas, his vision blurred, his defences weakened. He always comes back for more, believing he can still triumph against the odds when, it's now obvious, all that's left for him is more punishment.

He won't stop, so somebody needs to stop him. The Celtic board need to reach for the towel. In the Thrilla in Manila in 1975, after 14 rounds of the most brutal heavyweight contest of all time, Joe Frazier's trainer Eddie Futch called a halt to his extraordinary bloody feud with Muhammad Ali.

Frazier, heroic but unable to see out of one eye, protested. "Sit down son, it's over," Futch said, memorably. "Nobody will ever forget what you did here today."

Lennon, like Frazier, doesn't think he needs an Eddie Futch right now, but he does. And you have to ask, where is that man? Dermot Desmond, the majority shareholder, and Peter Lawwell, the chief executive, cannot still believe that Lennon can turn this around.

Their loyalty in giving him every chance is now looking like something else - a lack of leadership and a lack of compassion for the man at the centre of this storm. Celtic fans with longer memories and an appreciation of the things Lennon achieved are beginning to talk about duty of care and the board's responsibility to one of their most committed sons.

They feel the respectful thing to do here is bring an end to his reign, pay him what he's due and save him the stress of more months of running to stand still.

Save for his interview with Celtic TV when apologising for the trip to Dubai, Lawwell has gone quiet. In the good times, the chief executive was a magnificent operator, an astute decision-maker who was never slow to present Celtic as the model for all others to follow, a club like no other and all of that.

It got a little narcissistic, but Celtic would not be the first champion club to portray themselves as paragon of excellence and they won't be the last. If once sold on Celtic's, and his own, invincibility, this past while would have been sobering for Lawwell.

Rumours abound amid the vacuum

It's not just on the field where Celtic have lost themselves. In the vacuum we have conjecture. The board is gripped by inertia and doesn't know what to do. The board is moving for Eddie Howe and he'll be in at the end of the season. The board is working on something bigger, a revamp of the football operation including an exit for Lawwell.

In the meantime, Lennon is left to plug away, a colossus effectively reduced to the role of a caretaker, warming the seat for the next guy, whoever he is and whenever he arrives.

Lennon has won five leagues, four Scottish Cups and one League Cup as manager, he has won the kind of matches in Europe that Brendan Rodgers never won, he has signed class players whose deeds are written into the fabric of the nine in a row - Virgil van Dijk, Fraser Forster, Victor Wanyama just three of them, bought for less than £6m combined and sold to English clubs for £35m with more millions made from sell-on fees.

Those were the good times, but they're gone. Now all that's left are public relations horror shows off the field and grim battles on it. Lennon has done his job and for the large part he's done it well. It's now up to whoever's running Celtic to do theirs.

Hilarious History: You're Dead To Me returns with the fiercest woman in RomeCan Man United win the league?: Football Daily has all the latest as they regain top spot