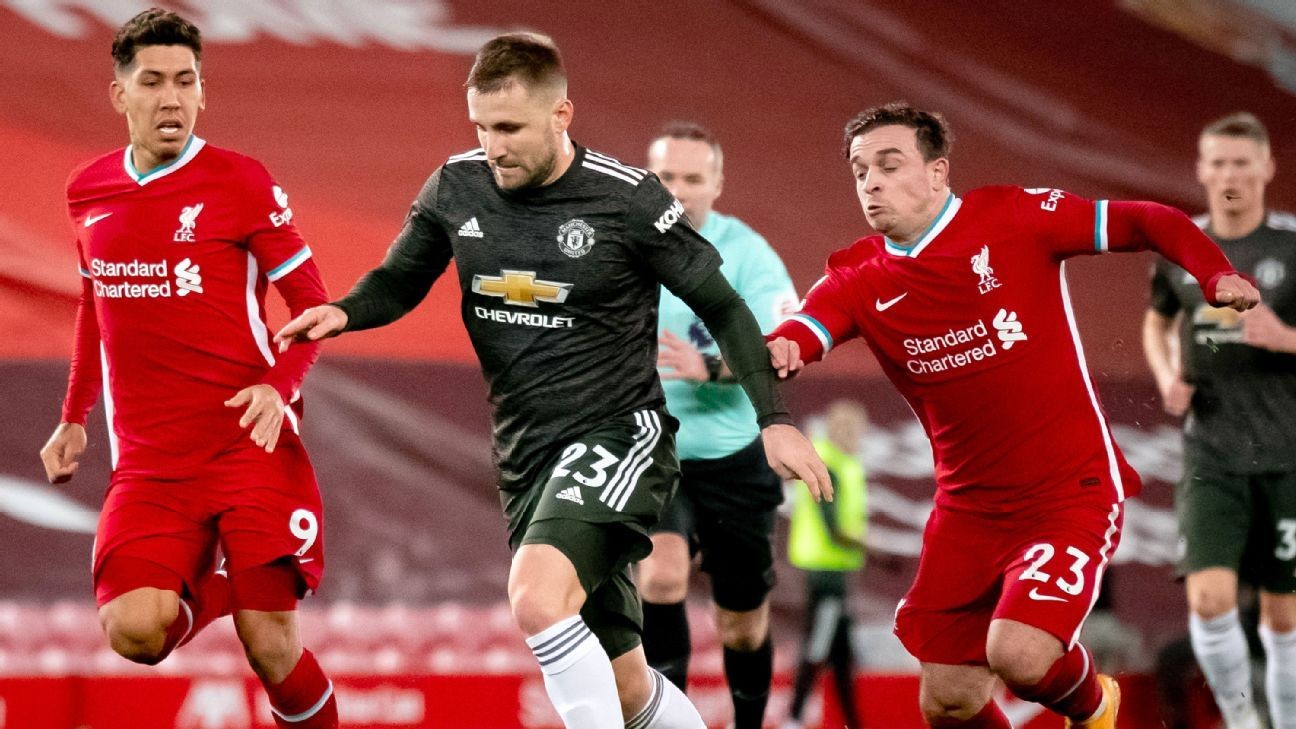 Despite using a white-and-black change kit for the majority of games this season when their red shirts clash with the home team, United wore an outfit described by kit supplier Adidas as "legend earth green" for the 0-0 draw at Anfield.

And with many television viewers unable to tell the two teams apart, the UK-based Colour Blind Awareness organisation saw its Twitter account, @colourblindorg, deluged by fans struggling to watch the game.

"It happens all the time, we have had a bad year this year," Kathryn Albany-Ward, the Colour Blind Awareness CEO told ESPN. "We have had Southampton vs. Sheffield United and recently Liverpool vs. Man United. We have had loads.

"But Sunday was the most kit clash complaints we have ever had. We had hundreds and spent all morning trying to collate them all.

"It is a really common problem, and it is a big problem because of the amount of people affected. It affects 1 in 12 people."

Sources have told ESPN that the Premier League uses computer software to ensure that all fixtures are played with clubs wearing identifiably different colours. The software has recently been updated to include a "colour blind friendly flag" to ascertain the best kit combinations for individuals who are colour blind.

In 2015, the NFL issued a statement pledging to improve its awareness of colour blind fans after hundreds of complaints following a "Color Rush" game between the all red Buffalo Bills and all-green New York Jets. Albany-Ward is calling for a similar move in English football.

"The NFL game was played and it was a red kit against a green kit and the whole of America who are colour-blind rose up," Albany-Ward said. "That is about 14 million colour blind people.

The kits worn by Liverpool and Manchester United on Sunday caused an issue for many fans. Ash Donelon/Getty Images

"The NFL had to change their kit regulations to make sure that it didn't happen again.

"I think they do need to rise up to a large extent in the UK. People are aware of it, but they don't retain the information long enough to do something about it.

"If a major broadcaster was to take this on, and present what it is like to be colour blind and watch a game to the right people I think that would be great.

"The Premier League does act, and they do notify the clubs as they know when these clashes will happen. I know because I was in touch with them today.

"They told United of this issue and United suggested a solution, but what they decided was not sufficient."

Sources have told ESPN that United were made aware of a kit issue by the Premier League 10 days before the Liverpool, but only asked to change socks from green to white.

To compound matters for United, who once changed an all-grey kit at half-time in a game at Southampton due to manager Sir Alex Ferguson complaining about his players being unable to see each other, midfielder Bruno Fernandes is currently an ambassador for colour blindness awareness in Portugal

"As part of our EU project, the Portuguese FA have two ambassadors, one is Bruno Fernandes, but I don't think he is aware of this kit clash," Albany-Ward said. "The other is another Jessica Silva, who plays for Olympique Lyonnais.

"They are aware of the issues it may cause, and they want to raise the profile of it which they did in September on colour blindness awareness day."