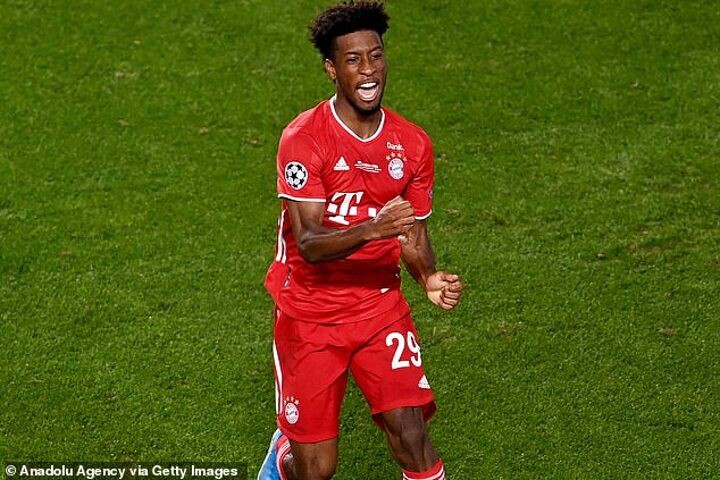 Kingsley Coman is talking about the shrieking and screaming from one night in Lisbon and he cannot stop smiling.

In good time, the Bayern Munich winger will discuss how he is plotting a reunion with Thiago Alcantara, Liverpool's new midfield metronome, and cast an eye towards Manchester so he can make points about Pep Guardiola and Paul Pogba, but the only place to begin is Portugal.

It is 59 days since Coman's 59th-minute header enabled Bayern to climb back to the summit of European football, his goal against Paris Saint-Germain deciding the most surreal Champions League final — with regard to atmosphere — in history.

'I've had some bad moments in my life and I've had some good ones but this was the best by far,' the France star tells Sportsmail.

'Usually in a stadium, with all the fans, you cannot hear things. But this time, as soon as the ball went in, I heard the scream from my team-mates. It was so special. The sad part was coming back to Munich. We did something in our stadium with everyone who worked for the club and that was nice.

'But in this moment you want to feel like you are the King of Europe and we missed seeing our fans. We are going to try to make it happen again this year.'

Few would bet against them. Bayern won all their fixtures in last season's competition, the first team to have a perfect record. It included skewerings of Tottenham and Chelsea in London, as well as an 8-2 demolition of Barcelona.

'I spoke to Ousmane Dembele, Antoine Griezmann and Clement Lenglet, the French guys in Barcelona's team,' says Coman. 'They told us we had played perfect football. We were so motivated, really confident. What we did, nobody can ever take away from us.'

Bayern begin their defence this evening in Munich against Atletico Madrid, one of the highest-profile fixtures of the group stage, and the jet-heeled Coman aims to be centre stage again.

At only 24 he has a remarkable C.V. that shows he has won a domestic league title every year since turning professional and making his debut at 17 for PSG - Ligue 1 twice and Serie A twice with Juventus before moving to Germany to help Bayern dominate and claim five Bundesliga shields in a total of 21 major honours.

He has played under the majority of Europe's top coaches, from Max Allegri to Carlo Ancelotti, and is thriving now for Hansi Flick. But the biggest influence on his career — aside from childhood hero Ronaldinho — is Manchester City boss Guardiola, who signed him for Bayern in 2015.

'What he asked me to do was to see football differently from my position,' Coman explains. 'He asked me to play wide, really go one against one, to make the difference like that.

'For me, the perfect game is to do a lot of skills, to help the team and to defend, and create a lot of opportunities.

'What I love is the way (Guardiola) played was to create space to be one against one. To have a coach when you are that young who has confidence in you and just wants you to go and play is amazing. When I play, I try to do beautiful stuff.'

More often than not, the beautiful stuff comes off. Coman will be an integral cog in France's squad at next summer's European Championship and it is during the discussion about their prospects of adding that trophy to the World Cup that Pogba's name comes up.

'I know Paul,' says Coman. 'Football is a lot in the head and the way you feel. When we are together in the national team, I know he feels so good. I am not in Manchester with him, so I don't know how he is when he's there, but in the national team he plays free in his mind, he can use all of his qualities.

'Maybe the pressure is different. In his first year in Manchester, I think he was the best player. He had the most assists, I think, but people were still not happy. They bought him and he was expensive but he is not supposed to be the one who scores all the goals and provides all the assists. He is there to give balance.

'Thiago didn't score a lot of goals for Bayern, for example, but what he did was so important in the team, as important as Robert Lewandowski, who scores 50 goals.'

Absence has certainly made Coman appreciate what Thiago brought to Bayern and he sees Liverpool as formidable rivals on the road to Istanbul.

'I trained with Thiago every day for five years — I know his quality,' says Coman. 'Liverpool are lucky to have him. They are one of the best teams in Europe and I hope we will meet at some point this season. Let's see if we can win it again.'