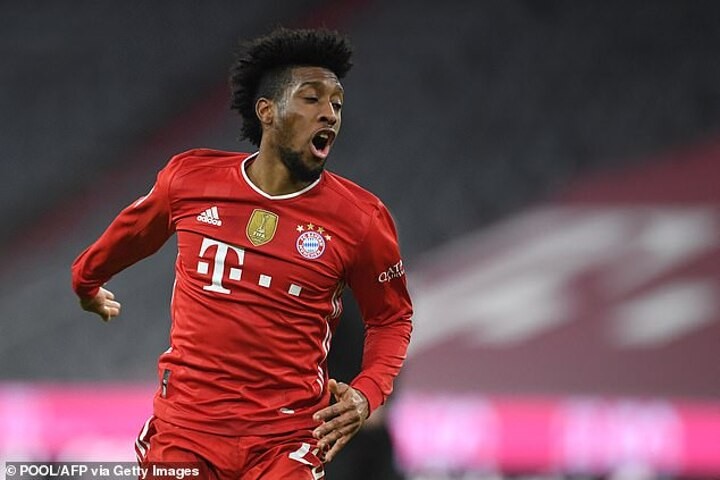 The Bayern winger's current deal is worth £140,000 a week and runs until summer 2023, but he is reportedly holding out for a much bigger wage increase.

According to Kicker, the German giants initally offered Coman a three-year extension until June 2026, which he turned down.

Manchester United and Manchester City held strong interest in the Frenchman - something Coman described as flattering - and the Red Devils are still understood to be interested in his signature.

Sportsmail reported last month that United were preparing to almost double his wages to £260,000 a week to tempt him to Old Trafford.

And Ole Gunnar Solskjaer is likely to be watching the contract developments with keen interest, with a view to making the 24-year-old a big summer signing, a year after failing to get winger Jadon Sancho from Borussia Dortmund.

Coman, who scored the winning goal in last season's 1-0 Champions League final victory against Paris Saint-German, has been a regular and dependable performer for Bayern since signing on an initial loan from Juventus in August 2015.

The reigning Bundesliga and European champions are keen to keep him at the club and avoid another issue like they had with defender David Alaba, a key player who will leave the Allianz Arena on a free transfer at the end of his contract this summer.

Bayern chairman Karl-Heinz Rummenigge said in December: 'Kingsley is an absolute top player today, and is extremely valuable for Bayern. He often makes the difference, just when it counts the most. Kingsley is not for sale.'

With two years left on the 26-cap international's deal, the club are likely to make another offer in due course.

But while Joshua Kimmich and midfielder Leon Goretzka are understood to be amenable to extensions, Coman's situation may prove trickier to resolve for Bayern.