Elvis Manu continues to herald an incensed display in the Dutch top-flight as he scored for Cambuur, Elsewhere Emmanuel Agyemang-Badu and Abdul Majeed Waris all scored for their clubs in France and Italy.Â

Ex-Chelsea star Michael Essien marked his debut for AC Milan in the Serie A as they lost by 3-1 to Napoli.

GHANAsoccernet.com has a comprehensive wrap on how Ghanaian players fared abroad over the weekend.

Derek Boateng was left with the Fulham U21 side when they travelled to snatch a point from Manchester United with a 2-2 draw.

In the Npower Championship, Jeffrey Schulpp warmed the bench Leicester City bench in their 2-2 home draw with Watford.

Albert Adomah started from the bench and was brought on in the 68th minute by Middlesbrough when they split points with Blackburn Rovers in a 2-2.

Arsenal loanee Daniel Boateng watched from the Hibernian bench when Raith Rovers defeated them 3-1 to kick them out of the Scottish FA Cup.

Ghana aceÂ Andre AyewÂ finally made a return from injury and came off the bench in the 73rd minute to replace Florian Thauvin when Olympique Marseille trounced Bastia 3-0. 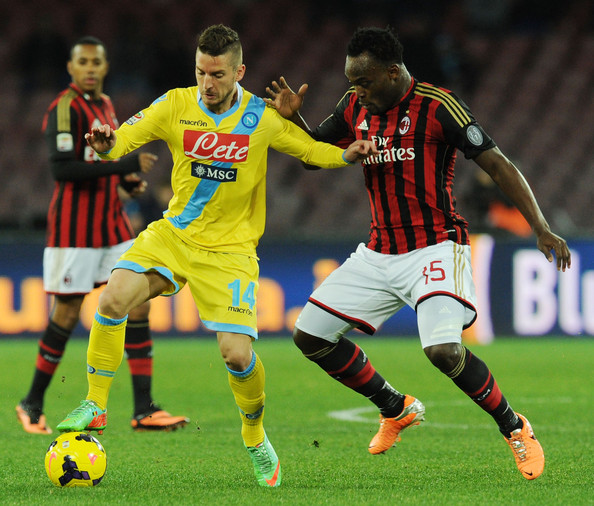 Michael Essien in action for Milan against Napoli
Defender John Boye returned to the Stade Rennes 18-man squad for the first time since October after gaining full fitness but was unused by manager PhillipeÂ Montanier when they lost 3-1 at Ajaccio.

DefenderÂ Jonathan MensahÂ did not make the trip with Evian TG toÂ Stade de la Mosson when they shared the spoils in a 1-1 draw with Montpellier.

Jordan AyewÂ played 80 minutes for Sochaux but could not find the back of the net as they got pummelled 2-0 at Lille.

In the Ligue 2, AS Monaco loanee Dennis Appiah played full-time for Caen when they lost 2-1 at Metz on Friday. While Appiah was playing full-time for Caen, crocked former Ghana U20 striker Kwame Nsor was in the stands supporting Metz.

In the Pro League Anderlecht were made to fight from behind to manage a 2-2 drawn game withÂ Kortrijk. Ghana winger Frank Acheampong who is out with an injury missed the game.

Versatile full-back Nana Akwasi Asare was a full-timer for KAA Gent who grind out a 0-0 stalemate against KV Ostende on Saturday.

Abdul Yakinu-Iddi is still nursing an injury and missed KV Mechelen's 0-0 draw at OH Leuven. However, former Lille center-back Jerry VandamÂ was at the heart of defence for Mechelen.

Lokeren pushed up to fifth place on the log after posting a 3-1 win over Sporting Charleroi. And, Ghanaian super-kid Eugene Nana Ansah who scored the match-winning penalty in the Belgian Cup semis was on the Lokeren bench as well as Abraham Kudemor for Sporting Charleroi.

Genk slipped back into their losing streak after Club Brugge beat them 3-1 at their own backyard. Ghanaian international Bennard Kumordzi came off the bench to play the last 7 minutes of the game. Youngster Marvin Ofori-Appiah was not in the Genk first team.

Daniel Opare was not in the Standard Liege team that won 2-0 againstÂ Zulte-Waregem.

In the Second Division, defender Stephen Asamoah played the full 90 minutes for AS Eupen who beat Geel 2-0. 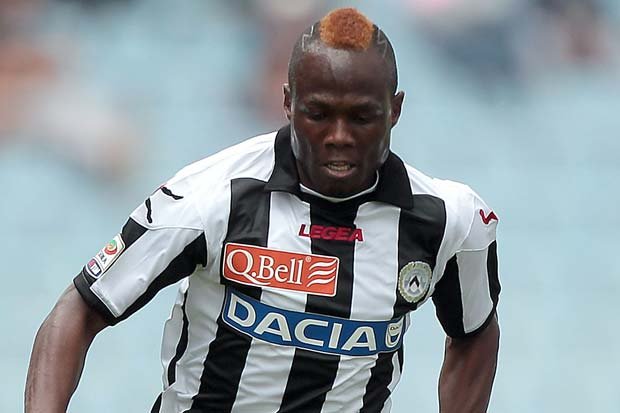 Michael Essien marked his debut for AC Milan in the Serie A on Saturday and played the full 90 minutes as they lost 3-1 to Napoli at the Stadio San Paolo.

Sulley Muntari watched the game from the bench and was unused.

Emmanuel Agyemang-Badu scored the third goal for Udinese when they posted a comfortable 3-0 win over Chievo Verona.

Kwadwo Asamoah played 80 minutes for Juventus when they shared the spoils in a 2-2 draw with Hellas Verona. While Asamoah was playing for Juve, youngster Godfred Donsah was left out of the Verona team.

Livorno slipped to the relegation zone after suffering a 1-0 home loss to Genoa. Midfielder Alfred Duncan came off the Livorno bench in the 71st minute while Isaac Cofie warmed the Genoa bench.

Afriyie Acquah played 28 minutes for Parma who shared the spoils in a 0-0 draw with Catania but AC Milan loanee Kingsley Boateng was unused by Catania.

In the Serie B, Maxwell Acosty came off the to play 22 minutes for Carpi who drew 1-1 with Spezia.

Fiorentina loanee Amidu Salifu was booked in the 17th minute and he played full time for Modena when they left it late to beat Cittadella 1-0.

Masahudu Alhassan was a full timer for Latina who managed a goalless drawn game at Varese.

Defender Mitch Apau was at the heart of defence forÂ RKC Waalwijk when they demolished FC Utrecht 5-2 on Sunday.

Fred Benson came off the PEC Zwolle bench after 62 minutes to help them draw 1-1 with Ajax Amsterdam. 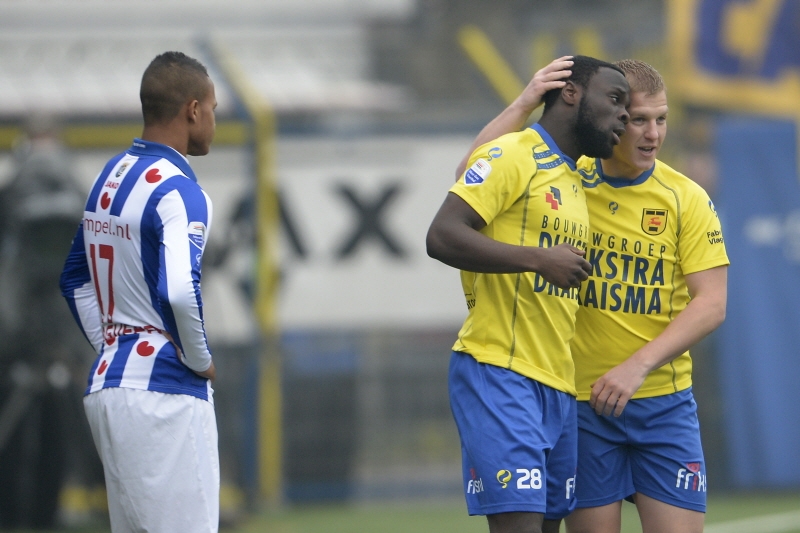 But duo Kwame Quansah and Edwin Gyasi were both not in the Heracles team.

Youngster Shadrach Eghan played the entire second half for FC Twente when they suffered a narrow 3-2 loss against PSV Eindhoven.

Christian Atsu played the full 90 minutes for Vitesse Arnhem who were held to a 0-0 draw by ADO Den Haag.

In the Lig.1,Â Balikesirspor boosted their promotion chances with a 1-0 win over Boluspor. Goalkeeper Richard Kingson and Kwame Karikari both played forÂ Balikesirspor.

Torric Jibril and Shaibu Yakubu both played for 1461 Trabzon when they drew 1-1 withÂ Gaziantep BB.

Fatau Mohammed was on the Granada bench when they lost 1-0 at Espanyol on Friday.

Richmond Boakye-Yiadom was an unused sub by Elche FC who drew 2-2 with Real Valladolid in the Spanish La Liga.

Clifford Aboagye failed to make the Granada II squad for the game.

Paul Quaye and Jafar Yeboah Ibrahim were in the Espanyol II team when they beat Levante II 3-1 in an away game.

Ghana first choice goalkeeper Fatau Dauda came off the bench to mark his debut in the South African Premier Soccer League for Orlando Pirates when they lost 1-0 to Mamelodi Sundowns.

Anthony Annan brought into the Schalke 04 regular squad but warmed the bench in their 2-0 win over Hannover 96. However, Kevin-Prince Boateng played the full 90 minutes for Schalke.

In the Bundesliga II, defende Marcel Appiah played for Arminia Bielefeld in their 3-3 drawn game with St Pauli.

Charles Takyi was not in the Energie Cottbus team when they suffered a 1-0 loss toÂ Sandhausen.

In the Liga 3, young striker Fredrick Kyereh was a second half substitute forÂ Elversberg who drew 2-2 withÂ Hallescher FC.

Samuel Inkoom was in full time action for Platanias who lost 1-0 toÂ Ergotelis.

Things got worst for FC Sion when they lost 2-1 at home to Lausanne Sport. Ishmael Yartey started from the bench and was introduced in the 79th as replacement for Ebenezer Assifuah.

Samuel Afum came off the bench in the 79th minute to play in Young Boys' 3-2 away reverse at FC Basel.

Black Stars winger Wakaso Mubarak was not in the Rubin Kazan team when they beat CFR Cluj 2-1 at the Estadio Municipal on Saturday.