Ghana striker Abdul Majeed Waris perpetuated his blistering scoring form by hitting a brace for Valenciennes in the French Ligue 1 on Saturday night while Christian Atsu also netted a consolation goal for Vitesse Arnhem in Holland.

GHANAsoccernet.com's Akyereko Frimpong Manson a comprehensive lowdown on how GHANAIAN stars fared abroad for their clubs over the weekend.

Black Stars striker Abdul Majeed Waris scored twice (51st and 72nd minutes) to put Valenciennes ahead but they allowed Ajaccio to crawl from behind to snatch a 3-2 victory from under their noses.

Defender Jonathan Mensah was an unused substitute and warmed the bench in the entire duration for Evian TG who held Toulouse to a 1-1 drawn game at the Stadium Municipal.

Stade Rennes caused more misery for Olympique Marseille as they handed down a 1-0 defeat to them at the Stade Velodrome. Winger Andre Ayew played 81 minutes for Marseille but defender John Boye was unused by Rennes.

Suspended Jordan Ayew watched his Sochaux side from the screen when they lost3-1 at Saint-Etienne.

In the Ligue 2, AS Monaco loanee Dennis Appiah completed the entire 90 minutes of the game for Caen who finished with ten men when ChÃ¢teauroux held them to a 1-1 draw.

Elsewhere in the third-tier league former Nania FC captain Charles Boateng was in action for Avranches who beat Saint-Malo 2-1.

In the Reserves League Kevin Osei came off the Marseille II bench to play 31 minutes in their 0-0 draw with NÃ®mes II at the Stade Paul Le Cesne in Marseille.

Youngster Bernard Mensah sat on the VitÃ³ria GuimarÃ£es bench in their 0-0 draw with Gil Vicente. Haminu Dramani was not in the Vicente team.

In the Liga de Honra, Alhassan Wakaso played for Portimonense who lost 3-0 to leaders Moreirense.

Derek Boateng was left out of the Fulham first team squad once when they got hammered 5-0 at Manchester City in the Premier League on Saturday.

In the Championship, Birmingham City's campaign got worse when Reading defeated them 2-1 at the St. Andrew's Stadium. Ghanaian super-teen Koby Arthur was not in the Blues squad for the game. 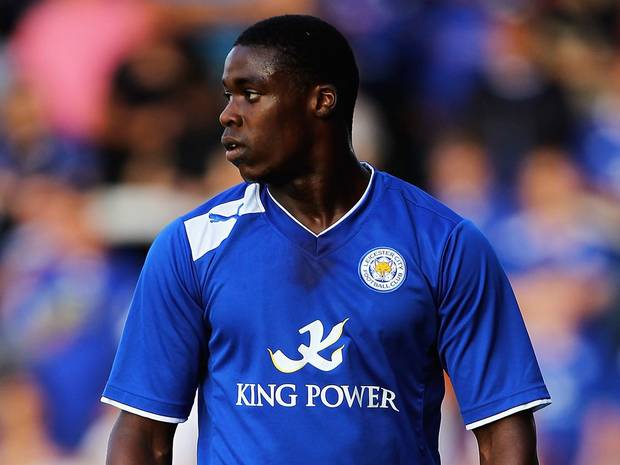 Midfielder Emmanuel Frimpong was not in the Barnsley team that suffered a 1-0 home loss to visiting AFC Bournemouth.

Albert Adomah was a full-timer for Middlesbrough when Queens Park Rangers drilled them 3-1 at their favourite Riverside Stadium.

Former Chelsea reserves and England U20 captain Nana Ofori-Twumasi was on the Yeovil Town bench when they drew 2-2 with Bolton Wanderers.

In the League One, Crystal Palace loanee Hiram Boatang was unused by Crawley Town who lost 1-0 at Oldham Athletics.

Former Liverpool reserves team attacker David Amoo was in action for Carlisle United but could not find the back of the net when Notts County defeated them 4-1.

Patrick Agyemang climbed off the Portsmouth bench in the 80th minute to play in their 1-0 home loss to York City.

Schalke 04 put their Uefa Champions League miseries behind them to brush aside relegation-trapped Eintracht Braunschweig in the Bundesliga on Saturday. Kevin-Prince Boateng completed the entire 90 minutes of the game for Schalke while Anthony Annan came off the bench in the 80th minute to play for the Royal Blues.

German-born Reagy Ofosu could not make the Ingolstadt first team squad when they drew 0-0 with St Pauli.

Baba Abdul Rahman dropped to the Greuther Furth bench in their 1-1 drawn game with Dynamo Dresden.

Still in the Bundesliga II, Marcel Appiah started the match for Arminia Bielefeld in their home tie with Energie Cottbus but midfielder Charles Tarkyi sat on the Cottbus bench.

Phil Ofosu-Aryeh was not in the MVS Duiburg team when they defeat Hansa Rostock1-0 at the DKB Arena in Rostock. Dennis Danso Weidlich was booked in the 15th minute and played the full 90 minutes for Rostock.

Forward Fredrick Kyereh returned from suspension to play 14 minutes for Elversberg in their 0-0 draw with Holstein Kiel. Jeff Gyasi was booked in the 84th minute and played full time for Elversberg.

In the reserves league, American-born Ghanaian winger Joseph-Claude Agyeman Gyau was in action for Hoffenheim II who lost 1-0 to Neckarelz on Saturday. 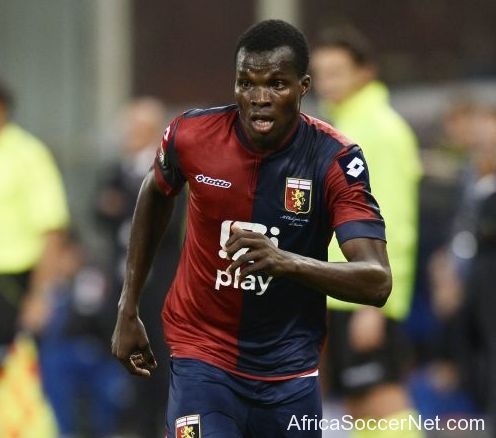 Inter Milan loanee Alfred Duncan completed the full 90 minutes for Livorno who were harassed 3-1 at Torino on Saturday. Youngster Emmanuel Gyasi watched the game from the stands at the Stadio Olimpico di Torino.

In the Serie B, Modena eased past Latina with a 4-0 victory at the Stadio Alberto Braglia. Fiorentina loanee Amidu Salifu and Masahudu Alhassan were not in the Modena and Latina teams respectively.

Emmanuel Agyemang-Badu came off the bench in the 78th minute to play for Udinese who posted a narrow 1-0 win over Sassuolo. Midfielder Raman Chibsah unused by Sassuolo.

Youngster Godfred Donsah did not travel with the Hellas Verona team when they lost 5-0 against Sampdoria.

Kwadwo Asamoah was brought on after 66Â  minutes by Juventus who posted a 1-0 win over ten-man Catania. AC Milan loanee Kingsley Boateng was on the Catania bench.

Michael Essien played the entire 90 minutes for AC Milan in their 1-1 draw at Lazio. Sulley Muntari came off the bench after 76 minutes to replace Andrea Poli.

Moro Al-Hassan came off the Cesena bench in the 86th minute when they posted a slim 1-0 win over Juve Stabio.

Brescia slipped to a 2-0 home defeat to Spezia on Saturday afternoon. Fiorentina loanee Nii Nortey Ashong was on the Fiorentina bench but Isaac Ntow Tuah and Mase Nana Addo Welbeck were not in the Brescia team for the game.

Maxwell Acosty was a 79th minute substitute by Carpi who suffered a 1-0 loss at Novara.

Young midfielder Fatau Mohammed played until the hour mark for Granada CF who managed a 1-0 win over ten-man Elche FC. Richmond Boakye-Yiadom replace Coro on in the 77th minute. Richard Boateng was not in the Granada team.

Thomas Partey scored for the third goal on a row as he claimed the match winner for Real Mallorca in their 2-1 win over Real Madrid B in the Spanish Segunda Division.

In the Segunda B, Isaac Nana Asare played for Atletico Madrid II who beat LeganÃ©s 1-0.

Richard Boateng was in full time action for Granada II when they beat La Roda 2-0. Clifford Aboagye was not in the Granada team.

Paul Quaye was a second half substitute by Espanyol II who beat ConstÃ ncia 1-0. 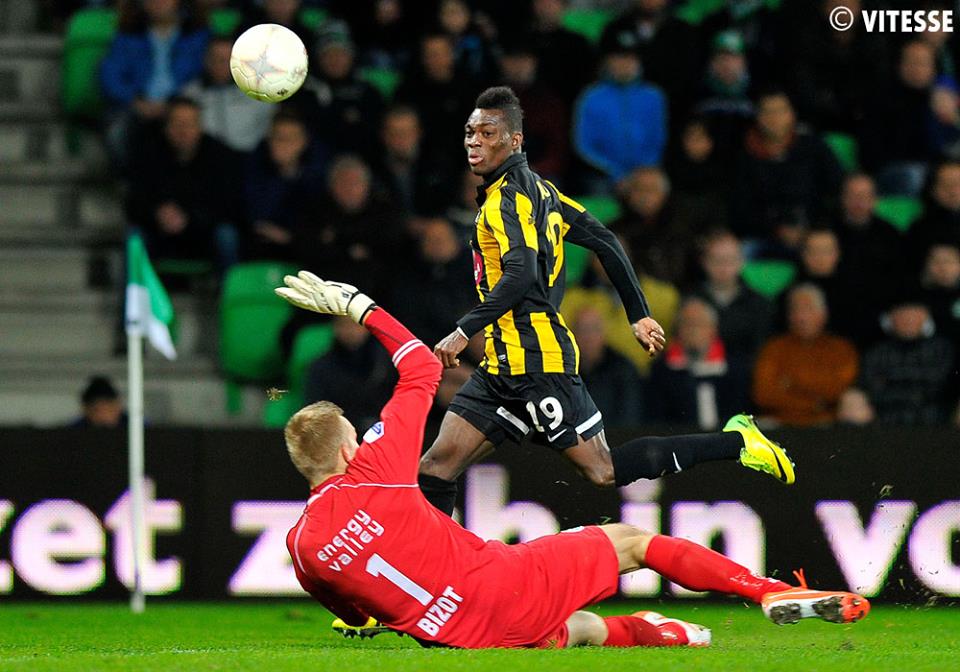 Fred Benson played the entire 90 minutes of the game for PEC Zwolle who suffered a 2-1 loss against AZ Alkmaar. Ghana boy Raymond Gyasi could not make the AZ first team squad.

In the second-tier league, Kevin Tete came off the bench to play 20 minutes for Jong Ajax who beat Fortuna Sittard 1-0. Swedish-born Patrick Amoah was a 78th minute substitute for Sittard. Elton Acolatse was not in the Ajax team for the game.

Defender Jerry Akaminko was sent off in the 83rd minute during Eski?ehirspor's 0-0 draw with Rizespor.

Former Ghana U23 striker Shaibu Yakubu was in full time action for 1461 Trabzon who drew 3-3 with Andanaspor AS in the Turkish second-tier. 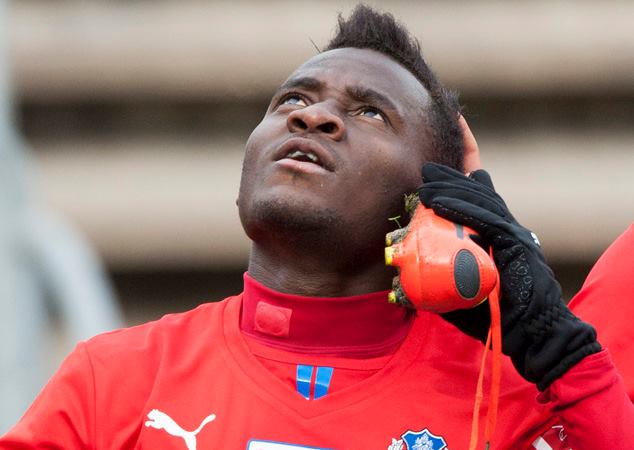 David Accam is delighted with his form
David Accam scored a 50th minute equaliser for Helsingborg IF in their 2-1 victory over GAIS in the Swedish Cup on Saturday. Midfielder Ema Boateng was brought on in the dying embers.

In a friendly tie, former Ghana U20 midfielder Ebenezer Ofori was sent off in first-half added-time when his AIK Solna side defeated Kalmar 3-0. Rubin Quayson and Moro Abubakar were both in action for AIK.

Nasiru Mohammed was introduced in the 52nd minute by BK Hacken who exited the Swedish Cup after losing 1-0 to Elfsborg on Sunday afternoon.

Ishmael Yartey returned to the FC Sion starting team and played 61 minutes before being replaced by Ebenezer Assifuah in their 2-0 loss at Aarau.

Young Boys were demolished 4-0 at their own backyard by Grasshoppers. Samuel Afum came off the bench two minutes from full time to play for Young Boys.

Isaac Vorsah could not return from injury to play for Red Bull Salzburg who walloped Neustadt 5-0 on Sunday.

Samuel Inkoom and Aziz Tetteh both played 90 minutes for Platanias when Atromitos thrashed them 3-0 in the Greek Super League.

AEL Limassol confirmed their superiority over Anorthosis Famagusta after thrashing them 3-0 at their own backyard. Carlos Ohene came off the bench to replace Luciano Bebe but Enoch Ebo Andoh was not in the Limassol team.

Former Stromsgodset defender Razak Nuhu could not play in Apollon Limassol's 0-0 draw with Omonia Nicosia in the Division One.

Ostrava held Sparta Prague to a 1-1 drawn game on Saturday. Midfielder Derrick Mensah missed the game with injury but 2013 Ghana U20 striker Francis Narh came off the bench in the 92nd minute to play for Ostrava.

Lee Addy watched from the screens because of injury while his Dinamo Zagreb side beat Hajduk Split 2-0.

Kevin Mensah scored under a minute from kick-off for Viborg who beat VestsjÃ¦lland 1-0 in the Danish Superliga on Friday. Kevin's twin brother Jeff Mensah was on the Viborg bench.

Defender Francis Dickoh was in full time action for Midtjylland who suffered a 1-0 home loss to NordsjÃ¦lland. Youngster Kamal Issah was on theÂ NordsjÃ¦lland bench while Kolja Afriyie also sat on their bench.

Danish-born Ghanaian forward Danny Amankwaa was unused by FC Copenhagen who shared the spoils in a 1-1 drawn game with Randers FC.

Ghana defender John Mensah suffered an injury and was replaced after 11 minutes when FK Nitra held Trencin to a 1-1 draw in the Slovakian top-flight division. 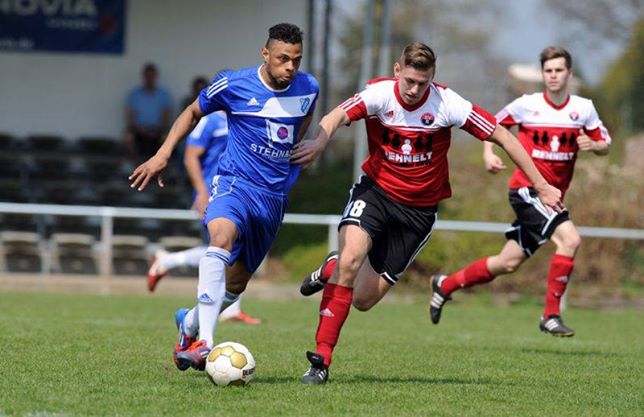 Nick Amartey, left, scored four goals for his side on Saturday
Dominic Oduro was introduced in the 66th minute by Columbus Crew in their 2-2 drawn game with Philadelphia Union.

Khalif Alhassan was not in the Portland Timbers when suffered a 2-0 loss to Colorado Rapids in the MSL.

Nana Attakora was unused by DC United who suffered a 1-0 loss to Toronto FC.

Midfielder Gershon Kwoffie was brought after 70 minutes by Vancouver Whitecaps who drew 0-0 with New England Revolution.

Dutch-born Kevin Luckassen was not in the Ross County side that lost 2-1 to Motherwell.

Arsenal loanee Daniel Boateng marked his debut in the Scottish Premier League for Hibernian when they lost 2-0 at St Johnston. He played 90 minutes.

Wakaso Mubarak played the entire 90 minutes of the game for Rubin Kazan who held Dinamo Moscow to a 0-0 draw.

Rabiu Mohammed was not in the Kuban Krasnodar team that played against Terek Grozny on Sunday but Mohammed Fuseini was on the Grozny bench.

Goalkeeper Fatau Dauda was not in the Orlando Pirates team that defeated Santos 2-0. Defender John Pantsil played full-time for Santos.

John Arwuah played for AmaZulu in their 4-1 loss against Wits University in the South African Cup on Saturday.