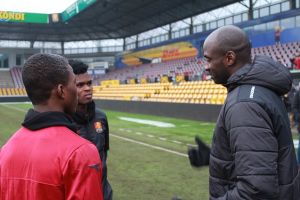 Ghanaian striker Godsway Donyoh is trying out at Danish giants Nordsjælland with a view of securing a permanent deal.

GHANAsoccernet.com revealed on Monday that the 21-year-old will sign a one-year loan deal with the European outfit.

The former Falkenberg loanee will be keen to impress the technical handlers to secure a move to the club.

GHANAsoccernet.com can reveal that the youngster will sign a season-long loan with a deal already in place.

Donyoh opted not to renew his loan stint with Swedish side Falkenberg due to injury setbacks.

He could only manage 13 appearances.

Donyoh joined Manchester City in 2013 and has also played for Djurgarden IF on loan.