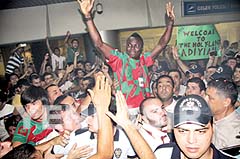 Confusion surrounds Ghana striker Dominic Adiyiahâ€™s move to Karsiyaka after his agents warned him over the consequences of playing in the Turkish second division.

Reports from Turkey claim he has sealed a deal with Karsikaya but his agents claim he is eyeing a move to a top-flight French side.

Hundreds of supporters of Â Karsiyaka stormed the Adnan Mederes Airport in Izmir on Tuesday to welcome the attacker.

Adiyiah travelled on the orders of his club AC Milan who have strong links with the Turkish side.

His agents warned him against the move to Karsiyaka saying it could damage his chances of playing in the Black Stars and also gaining a move to a top-flight European side.

GHANAsoccernet.com understands that his agents have ordered him to return to Italy while they negotiate a move to France.

The Ghana international is yet to make an appearance at the San Siro since moving from Norwegian outfit Fredrikstad in the summer of 2010 and had loan spells at Reggina and Partizan last season.

The 21-year-old is widely expected to leave the Italian giants this summer, be it on a temporary or permanent basis, and has been linked with a loan move to Hannover in Germany.

But in a shock move Adiyiah travelled to Turkey to seal a big-money move for the club who are celebrating their 100th year anniversary and are keen on gaining promotion to the top-flight. The vociferous fans of Karsiyaka waited for hours to meet Adiyiah and when he landed they broke into singing and dancing while chanting the Ghanaian playerâ€™s name.

He was carried shoulder high while wearing the clubâ€™s jersey to greet the fans before being whisked away to see the clubâ€™s facilities.