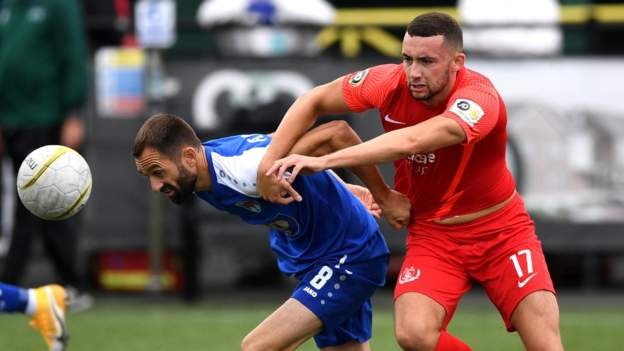 Connah's Quay Nomads put up a valiant effort against Prishtina in the Europa Conference League but ultimately came up just short.

Nomads faced an uphill task after losing 4-1 in the second qualifying round first leg in Kosovo but Jamie Insall gave them a dream start after just three minutes at Aberystwyth's Park Avenue.

Captain George Horan brought Nomads level on the night before Insall's second put them ahead and within two goals of levelling the tie.

Prishtina face Norway's Bodo/Glimt in the third qualifying round, with the Norwegian champions completing a 6-0 aggregate win against Iceland's Valur Reykjavik.

Connah's Quay Nomads manager Andy Morrison told BBC Sport Wales: "We had to get off to a good start and we did, should have been 2-0 up, and then gifted them two goals from two mistakes and then made it difficult for ourselves.

"But we believed and we kept going and it's an incredible performance and I'm incredibly proud of the players.

"There will be a couple of days of pain and what ifs and then batten down and we go again."