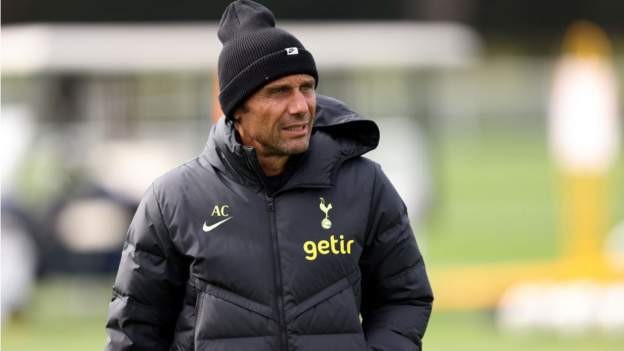 Antonio Conte says Tottenham's Champions League trip to Eintracht Frankfurt on Tuesday is the chance to quickly get over Saturday's north London derby defeat at Arsenal.

Spurs lost 3-1 at Emirates Stadium for their first Premier League defeat of the season.

They have won one and lost one of their opening two Champions League matches to sit second in Group D.

"We have a chance to play another game. I think this is important," said Conte.

"After a loss you want to play another game quickly, and we have this possibility tomorrow.

"We know very well the game will be very tough because we are playing against Eintracht Frankfurt, they won the Europa League last season.

"We are talking about one of the best teams in Germany. At the same time we want to play our cards here.

Tottenham will again be without Dejan Kulusevski as the midfielder continues his recovery from a hamstring injury suffered on international duty with Sweden.

Lucas Moura is also still sidelined, but Wales defender Ben Davies is fit to return to the squad after recovering from a knee injury.

With Moura and Kulusevski ruled out Conte could give Spain forward Bryan Gil a first appearance of the season.

When asked about the severity of Kulusevski's injury, the Spurs boss admitted he was unsure when the 22-year-old will return.

"About Kulusevski, honestly I don't know the timing to recover," said Conte. "The doctors are not finding the right solution. I am not optimistic, I am pessimistic about this situation."