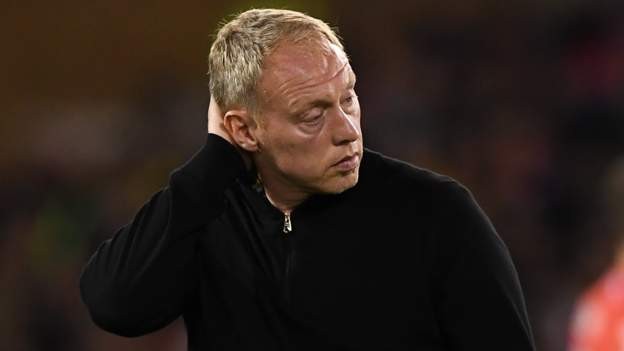 On Wednesday it was confirmed that Cooper will remain in his role following meetings at the club.

Forest are bottom of the Premier League table with just one win so far after returning to the top flight for the first time in 23 years.

"I wouldn't want to be in that position," said Gerrard.

"To bring in 21 players in one window is unique. I have never seen it or heard of it before."

The two teams play each other on Monday 10 October.

Gerrard said he understood Cooper's position and the difficulties facing him regarding the amount of loan players he had.

"I know Villa had a window where they had a lot of loan players and they had to replace them.

"I'm sure Steve was in that position because he had a lot of loan players, but they recruited really well and signed a lot of good players.

"From where I am, to think about how you'd deal with that and manage that, it would be extremely tough and challenging."

Cooper was appointed manager in September 2021 and gained promotion in his first year in charge.

He then spent £145m on 21 players in the summer transfer window, including ex-Manchester United player Jesse Lingard, goalkeeper Dean Henderson on loan from the same club and Wales international Neco Williams from Fulham.

"I think he deserves the time for that to settle, for them to get used to the club and how Steve plays," Gerrard added.

"It takes time when you make one or two changes, never mind 21."

In regard to the form of his own team, who are currently 14th in the Premier League, Gerrard believes they are showing signs of pushing further up the table.

"﻿We're a goal away from being around the mid-table places.

"﻿Recent performances have given us a platform but there's no-one on the inside at Villa who thinks we're there. We know we've got to keep pushing in every way, shape and form."