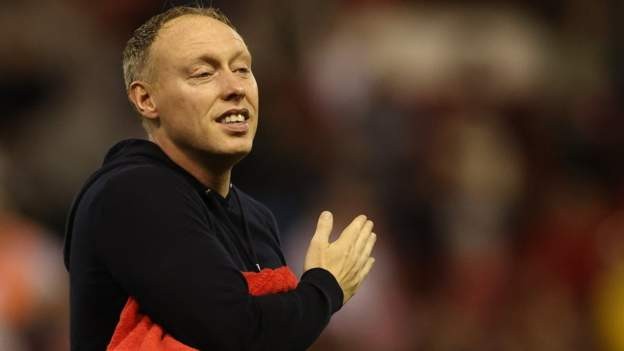 Sunday's showdown is the second successive Championship play-off final that Steve Cooper has managed in, having taken Swansea to Wembley last season

Boss Steve Cooper says the chance to end Nottingham Forest's 23-year Premier League absence has kept him awake at night as he prepares for Sunday's play-off final against Huddersfield.

"It's a massive prize," Cooper said.

"That's the bit that maybe makes you sleep a little bit less, makes you more excited and maybe nervous."

When Cooper succeeded Chris Hughton in September, he became the 20th boss to take charge of the club since the two-time European Cup winners dropped out of the Premier League.

At that point, attempting to lead them back to the elite would have seemed as insurmountable as any faced by a manager at the City Ground before him.

Forest were bottom of the table when he took charge after eight games, but the Welsh tactician transformed them into the Championship's best-performing side from that moment onwards.

Their surge up the table saw them challenge for automatic promotion before settling for a fourth-place finish and a first play-off campaign for 11 years.

They squeezed past Sheffield United on penalties in the semi-finals after a 3-3 tie on aggregate to reach their first ever play-off final.

The holy grail is now just one win away.

"Getting there is always an ambition and motivation," Cooper told BBC Radio Nottingham.

"It has been a driver, not since qualifying for the play-offs or winning the semi-finals, but for a while now.

"It's a motivation that makes you work as hard as you can."

'Belief is the key'

Cooper says he also "feels" the buzz of anticipation in the East Midlands city.

"I've seen the amount of people at the stadium, the queues. That adds to the excitement and motivation," he said.

"We've not been to the new Wembley before, and it's a long while since the club last visited the old Wembley. I know that is really important. We have embraced what all that means to people."

While Cooper has been preparing the side for football's most valuable game - financial analysts Deloitte say victory would be worth about £170m - on English football's biggest stage, the Welshman insists the Reds are approaching the game "the same as any other".

"We are at this final, in this magnificent stadium, in this high-pressure game, because we have done things a certain way," he said.

"We have to continue as much as we can with that, while understanding the surroundings of the game and context of the game.

"It's really important for players to realise that we are in this position, we finished where we did in the league and we got through the semi-final to play in a final because of what we've done, which is commit to a way of playing and working.

"We have done nothing new since the semi-final; there is nothing new to be learned or changed.

"The biggest factor to get the job done is being us, that is what we have to aim to do. Belief is the key now."