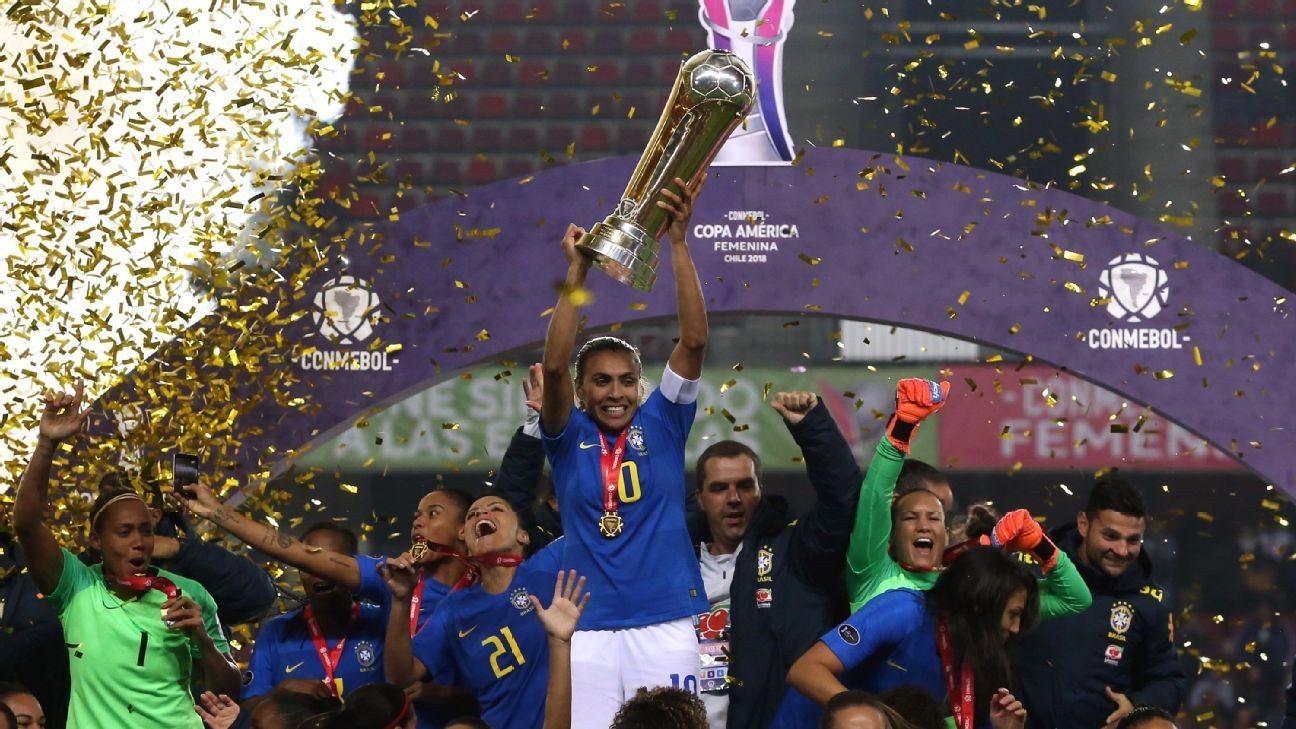 The ninth Copa America Femenina, which kicks off in Colombia this Friday, looks like a significant moment in the development of the women's game in South America.

There is the expectation of big crowds in the cities of Cali, Armenia and Bucaramanga and, with the tournament now planned to be held every two years instead of four, there is also a hope that standards will continue to rise. South America cannot currently hope to match the strength in depth of the Women's Euros but -- perhaps belatedly -- it is moving in the right direction.

It is the case, though, that the Copa would essentially seem to be two different tournaments -- one involving Brazil, the other including the remaining nine teams.

Brazil have claimed all but one of the eight previous Copas -- Argentina came out on top when they hosted the competition in 2006. Around that time, though, a case could be made for Brazil being the strongest side in the world, despite coming up just short in a succession of World Cups and Olympic tournaments. It was all based on the spontaneous generation of talent in a country the size of a continent. But as the sport caught on all across the globe, Brazil complacently failed to invest. By 2012 it was clear that they had been overtaken, and they have not subsequently got close to the serious silverware.

But they are now making up for lost time, developing their domestic league and appointing a national team coach of vast experience -- Pia Sondhage, from Sweden, who took the United States to Olympic golds in 2008 and 2012. Her task is to renew the side, both in terms of personnel and of footballing identity. With Marta injured, Formiga retired and Cristiane left out, this is the first tournament Brazil will have played since 1995 without any of the three pillars of the national team. Recent defeats to Denmark and Sweden have been discouraging, but Sondhage hopes that after a solid month together, Brazil will come back from Colombia with the trophy and with a team capable of going all the way in next year's World Cup in Australia and New Zealand.

Colombia bid unsuccessfully to stage that competition -- an illustration of the growing importance of the women's game in the country, which has surely been boosted by strong cultural links with the United States. With the exception of Brazil, there was no South American involvement in global competitions until the current century.

ESPN FC Women's Rank: The best 50 players in the world6dESPNWomen's Euros 2022: Your daily guide to fixtures, results and coverage14hESPNHuge summer of women's soccer: Your guide to Euros, USWNT qualifiers and more10dESPN

So far, in the Olympics and the World Cup, there have been just two non-Brazilian South American wins. In 2015, Colombia enjoyed a glorious moment, beating France 2-0 and making it through to the knockout stage, where they fell to the U.S. And three years ago, at the last World Cup, Chile won 2-0 over Thailand. This may have been a group game of little apparent relevance but it would be unwise to overlook its significance. Chile came out of their World Cup debut with considerable credit, conceding 5 goals in 3 games. Contrast this with Ecuador's debut in 2015: 3 defeats, 1 goal scored, 17 conceded.

Argentina did as badly in both its first tournaments in 2003 and 2007. Back in the field in 2019, though, they did much better. True, they are still waiting for a first win, but their record -- 2 draws and a defeat, 3 scored, 4 conceded -- tells an encouraging story. The South American teams are no longer merely going to make up the numbers. They can now be competitive -- and this Copa is going to determine who will get the chance to be competitive in the World Cup (3 places plus 2 in the playoffs) and the 2024 Paris Olympics (two places). It would be a major shock if one of those slots is not snapped up by Brazil, but the battle being them should be very interesting.

Colombia are counting on home advantage -- which worked for their men's team the only time the Copa America came to the country back in 2001. It remains Colombia's only win.

It might be a bit much to expect the women to overcome Brazil, but that task comes later. First they need to get out of the group, where the stiffest opposition would seem likely to come from the fast-developing Chile. Ecuador are also dangerous, though their preparations have been hit by the wave of unrest in the country, and Paraguay are starting to improve. Bolivia will probably be the weakest team in the field.

In the other group there is the clash between Brazil and Argentina -- not as sharp as in the men's game with the disparity of forces, but nonetheless interesting as Brazil attempt to play their way through the Argentine defence. Peru are still in early stages of development, but there could be fireworks in the opening game of the group, when Uruguay face Venezuela. These are two teams who have never made it to a World Cup or Olympics, but Venezuela have been giving a high priority to the sport, illustrated with two recent warm ups wins over Chile, while Uruguay showed their development with a couple of thrashings of Bolivia. Of the four countries from the continent never to have reached a global event, these two -- perhaps especially Venezuela -- are the most promising candidates.

What happens in Colombia between 8-30 July could prove to be an important chapter in stories that have recently started to be written.