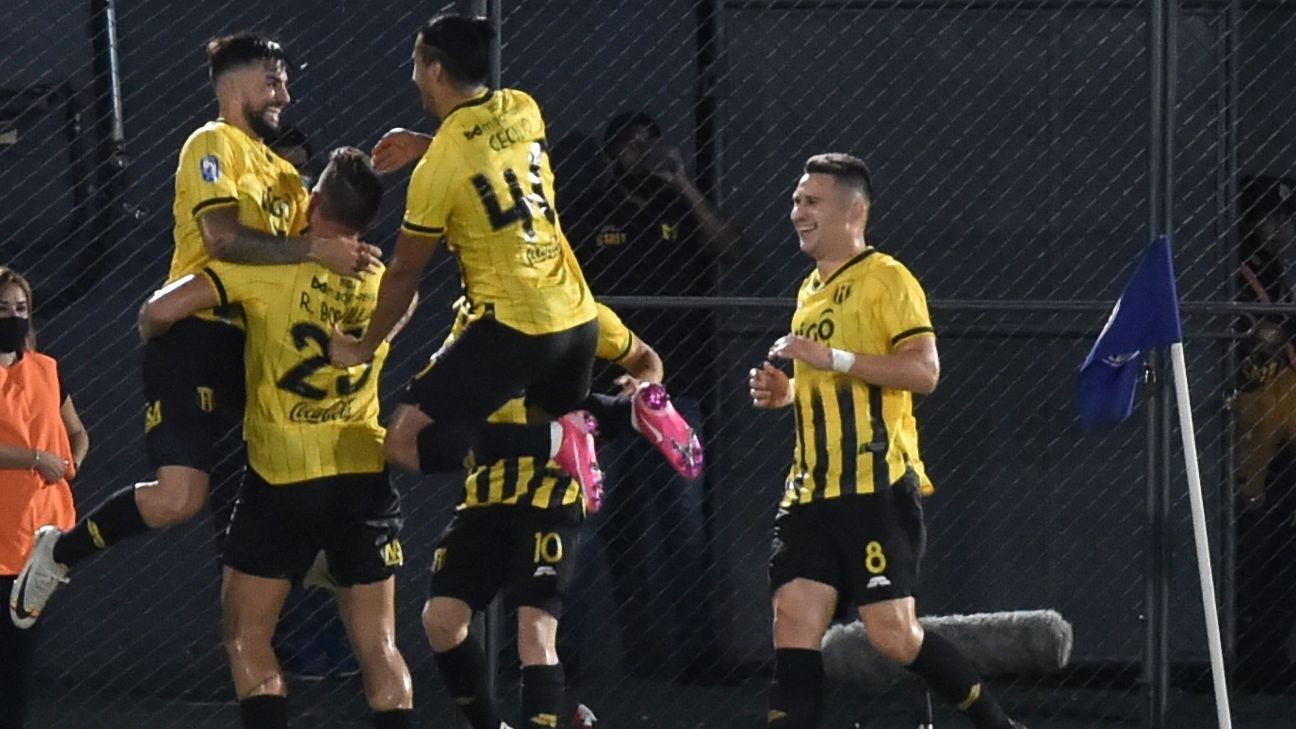 Paraguayan side Guarani hope to repeat a Cinderella run at the Copa Libertadores. NORBERTO DUARTE/AFP via Getty Images

It is only just over three weeks ago since Palmeiras and Santos fought out a high summer all-Brazilian final of the 2020 Copa Libertadores -- and already the time has come for the 2021 competition to get underway.

For a couple of weeks though, no team from Brazil is in action -- or Argentina, Colombia and Chile. The competition kicks off with the first qualifying round.

A team each from Bolivia, Ecuador, Paraguay, Peru, Uruguay and Venezuela set off on what they hope will be the long road to the group phase, which gets going at the end of April.

The sides that enter this week have three rounds to negotiate in order to get there. It is a tough task. But they can all take heart from last season's performance of Guarani. A traditional club who are at best the fourth biggest in Paraguay, Guarani jumped through all three hoops -- eliminating the mighty Corinthians of Brazil along the way -- and then distinguished themselves in the group phase, making it through to the last sixteen of the competition where they fell with honour to 2017 champions Gremio of Brazil.

Guarani's 2020 Libertadores campaign brought in such much needed revenue, both from TV right and from player sales -- three of their team have been snapped up by Austin FC in the United States. And Guarani can dream of doing it all over again. They are back in the first qualifying round where, as last year, they face opponents from Bolivia, tournament debutants Royal Pari from Santa Cruz de la Sierra. Twelve months ago Guarani faced a tricky visit to altitude to take on San Jose of Oruru. This time they start at sea level -- and can dream of hitting the heights later in the competition.

Wednesday's earlier match is in Peru -- although Universidad Cesar Vallejo will not enjoy the full benefits of home advantage. They are from the northern town of Trujillo. For the moment though, all football in Peru is restricted to the capital, so they will take on Caracas in Lima. Cesar Vallejo are named after a poet -- and back in his playing days there was poetry in the left foot of Jose Del Solar, who was perhaps Peruvian football's most successful export of the 1990s, when he spent most of the decade in Spain. He seemed to be on course for a notable coaching career when he won the Peruvian league title with Sporting Cristal in 2005. But much of what followed, including a spell in charge of the national team, has been disappointing. He could get things back on track by taking Cesar Vallejo into the group phase for the first time -- in two previous Libertadores participations they fell in the qualifying round. The first obstacle is Caracas of Venezuela, a team which last year only missed out on a place in the last 16 on goal difference.

Uruguayan side Liverpool are in the Copa Libertadores under unusual circumstances. DANTE FERNANDEZ/AFP via Getty Images

And getting the ball rolling on Tuesday night are Liverpool of Uruguay, who fell in the qualifying round of their only previous appearance a decade ago. Liverpool's participation this year is a story in itself -- which has everything to do with the fact that after a long shutdown Uruguayan football decided to press ahead with all of its scheduled competitions. Many South American countries improvised a calendar to ensure that everything could be finished by the end of the year. But Uruguay will be pressing on grimly for some time with the 2020 fixtures. This left an obvious problem. The country's slots in the Libertadores would have to be allocated before the domestic season was over. How to do it?

The answer was bizarre. At a certain point in the league campaign a snapshot was taken. Uruguay has four slots, two in the group phase, one in the second qualifying round and one, which needed to be filled urgently, in this opening round. One by one, this last slot was offered to the top four teams. They could take it and start at the bottom of the competition -- or leave it and trust that they could secure one of the better slots. And the top four all turned it down. So Liverpool, fifth in the table, were offered and accepted one of the four places in the 2021 Libertadores. They are at home on Tuesday night against Universidad Catolica -- not the more famous side from Chile, but the one from Ecuador.