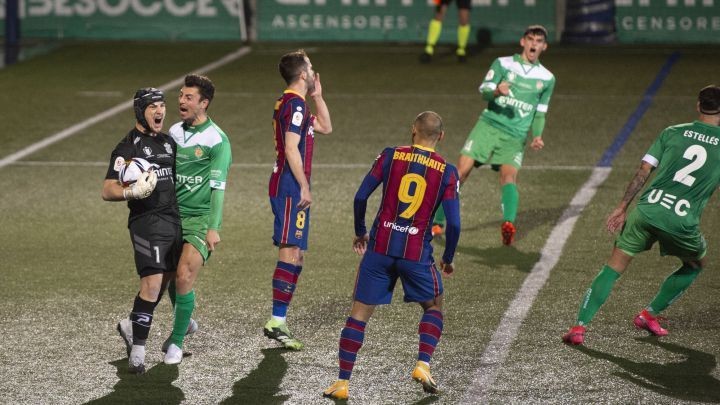 The Cornellà keeper went down in history in their 2-0 defeat to Barcelona, stopping a Pjanic penalty in the first half and a Dembélé penalty in the second.

Ramón Juan made history on Thursday night in the Copa del Rey. The Cornellà goalkeeper became the first ever to stop two penalties from Barcelona in the same match. The youngster has been knocking on the door of professional football for some time now and there’s no doubt his performance in this match will put him in the spotlight. The 21-year-old made Barcelona suffer during the regulation 90, making several vital saves in addition to his penalty stops, and ensured the game went to extra-time, where Barcelona won 2-0.

The Cornellà keeper saved a penalty from Miralem Pjanic in the first half and then one from Dembélé in the second. For both spot kicks Ramón Juan guessed correctly, going right for Pjanic’s effort and staying still for Dembélé’s, and what’s more from neither save did he give Barcelona the chance of a rebound.

“I hadn’t saved two penalties in my life, not even in a shoot-out. We talk about it a bit with the goalkeeping coach but it was intuition. Though the truth is I watched Pjanic’s penalties for Juventus and he tends to send them right. With Dembélé it was pure intuition. My mind told me to stay in the middle and I got lucky,” the keeper told DAZN Spain.

Despite the fact that keeper Ramón was beaten at the start of extra-time by a solid shot from Dembéle, his overall performance was superb, making saves throughout the match. At 21 this is the second top flight team he’s faced, after Atlético Madrid. He’s been at Cornellà for nine years and as he said to this newspaper before tonight’s match: “My dream is to play professional football with Cornellà”. He’s definitely on the right path.

This two latest misses from the penalty spot only increase the pressure over the issue at Barcelona. Ignoring the shoot-out against Real Sociedad, they ‘ve missed five of the last 12 this season. Pjanic and Dembélé add their names to the list of Griezmann, Messi and Braithwaite. The last seven penalties to have been scored by Barça have been taken by Messi (five), Braithwaite (one) and Dembélé (one).