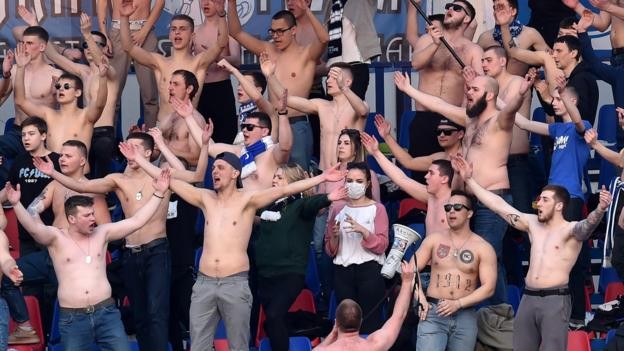 It is "frankly not comprehendible" that professional football is continuing in Belarus amid the coronavirus pandemic, says world players' union Fifpro.

It is the only country in Europe where top-level football is being played.

Eight fixtures are scheduled in the Belarusian Premier League this weekend.

"We're appealing for it to be taken with the same cautionary measures that have been taken in the rest of football," Fifpro general secretary Jonas Baer-Hoffmann said.

"It is frankly not comprehendible how this could be going on.

"Why those standards there would be looking so much different from just across the border, I don't think anybody can explain. So everything in common sense tells you that they need to apply the same standards and we will be lobbying to that effect.

"Yes, there are players who are reaching out who are concerned."

The league has seen a surge in popularity with the Belarus Football Federation securing broadcasting deals with sports networks in 10 countries, including Russia, Israel and India.

Fifpro does not have a member union in Belarus but said it will lobby world governing body Fifa and European counterpart Uefa on the matter.

On Saturday, the derby between FC Minsk and Dinamo Minsk was watched by a capacity crowd of 3,000 people in Belarus' capital.