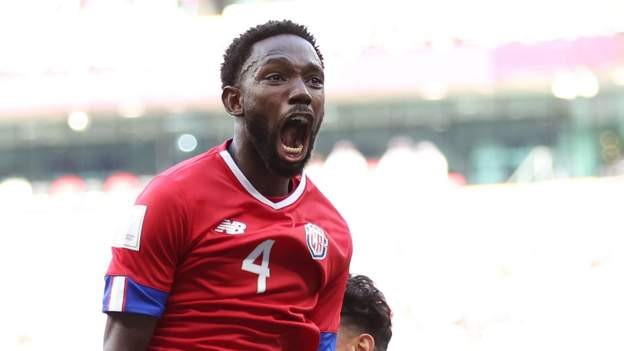 Coach Luis Fernando Suarez says Costa Rica will relish the opportunity to upset the odds again at the World Cup.

The Central Americans' hopes of reaching the last 16 in Qatar looked over after a 7-0 loss to Spain.

But after beating Japan, a win over Germany would send them through and emulate their heroics of 2014, when they knocked out Italy and England.

"Eight years have gone by and players have changed but you have good memories," said Colombian Suarez.

"Maybe it's down to the genes of the Costa Ricans. When they reach a World Cup they do things differently and they play well. I'm not just talking about 2014 in Brazil, I think also about Italy 1990.

"They reached the last 16 when no-one believed in them. They are never the favourites, which is good.

"We need to be emotionally strong and break our backs in this match. If Germany is knocked out it would be a major thing and we would be proud to be responsible for that."

A draw could even be enough for Costa Rica, but Germany must win having lost 2-1 to Japan in their opener before drawing 1-1 with Spain.

The four-time winners went out in the group stage as holders in 2018, their earliest exit in 80 years, and coach Hansi Flick says he has no plans to step down if they suffer another early exit.

"We want to kill off the game early to pile pressure on the other group game. We have to have the attitude we showed against Spain."

Who is through in World Cup and who could join them?Fifa World Cup: Groups & scheduleWorld Cup TV coverage guide

Costa Rica centre-back Francisco Calvo is suspended after picking up his second booking of the tournament against Japan.

Daniel Chacon, 21, appeared as a late substitute in that win but coach Suarez may prefer the experience of Juan Pablo Vargas, 27.

Leroy Sane could start for Germany after the winger recovered from a knee problem to play as a substitute against Spain.

Niclas Fullkrug is hoping for a start after replacing Thomas Muller to score the Germans' late equaliser.

Things have fallen kindly for Germany and their route to the last 16.

They are lucky to still be in with a shot of making it, but I think they will make the most of their opportunity and wipe the floor with Costa Rica.

Germany have got some good attackers and although they are vulnerable at the back, they should win comfortably.

Sutton's full predictions for the final round of World Cup games