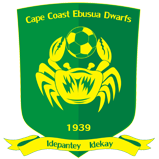 A court in Cape Coast has ordered the liquidation of one of the country’s oldest football clubs Ebusua Dwarfs over a 20-year debt to a lower division club in Ghana.

A High Court has approved a motion for the Mysterious Club to be handed over to liquidators to settle a long-standing debt to lower division side Great Liverpool FC.

Great Liverpool dragged Dwarfs to court over the club’s failure to settle the a long-standing onward  transfer fee of their former player Patrick Villars to the club.

"Its HEREBY ORDERED that the Registrar General to be appointed as the Official Liquidator to win up the club Company and settle the indebtedness of the Applicant," portion of the ruling read

"It is FURTHER ORDERED that the Official Liquidator lifts the Veil of Incorporation on the Respondent's Company and attach their properties for sale to satisfy debt."

The lower division side transferred the former Ghana international Dwarfs in 1999 but dispute over the transfer with an involvement of a third-party club stalled payment.

Great Liverpool FC coach and owner Philip Vincent Cann dragged Dwarfs to court after they refused to pay him his share of the onward transfer to Turkish side Trabzonspor.

The ownership of the player has become a bone of contention for years leading to the decision of the plaintiff to head to court.

Vincent Cann, who owns the economic right of the player, is reported to have been side-stepped in the business transaction.

The court has ordered the liquidator to wind up the Ebusua Dwarfs and settle the indebtedness to the lower division side.

The ruling of the court has sparked anxiety among their fans in Cape Coast.

Patrick Villars joined Ebusua Dwarfs in 1999 and spent three seasons at the club.

He won silver with Ghana at the 2001 FIFA World Youth Championship in Argentina and was part of the country's 2004 Olympic football team.