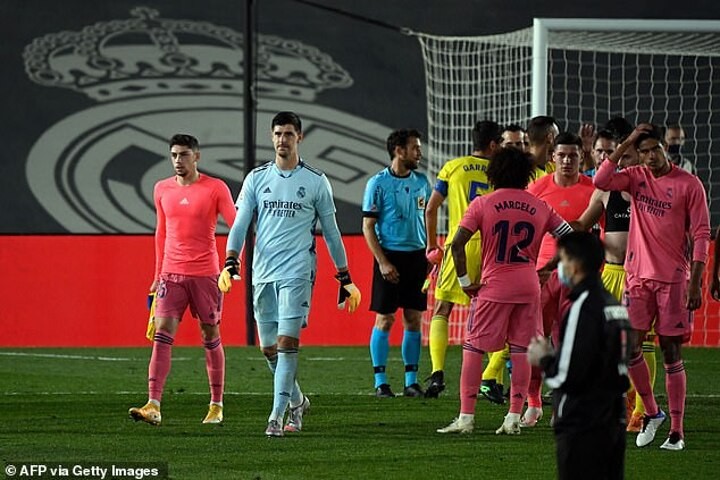 Real Madrid stopper Thibaut Courtois admitted his side's surprise LaLiga defeat by Cadiz is a 'wake up call' ahead of their Champions League opener and first El Clasico of the season at Barcelona.

The Spanish champions were the victims of a shock upset after newly-promoted Cadiz secured a famous 1-0 win at the Bernabeu on Saturday.

Anthony Lozano's early strike proved to be the eventual winner after a frustrated Madrid had a Luka Jovic effort ruled out for offside while Karim Benzema was thwarted by the bar.

It was a first loss of the season for Zinedine Zidane's side and they now turn their attentions to Wednesday's Champions League clash against Shakhtar Donestsk and Saturday's showdown at the Nou Camp.

And Courtois warned Madrid cannot afford to be as sloppy in those games.

'A defeat is always a good thing because it gives you a wake-up call to get back down to work, realise the things we're doing badly and to improve,' he said afterwards.

'We shouldn't attach too much importance to it. It's a defeat, in particular you've got to win your home games, but the games now come thick and fast and we'll have to put in a good performance against Shakhtar, win the match and head to the Camp Nou in confident mood.'

He added: 'We'll have to analyse the match and take a look at things. Our first-half performance was very poor, I was called into action three or four times, we weren't winning our individual battles and they were better than us in virtually every department.

'The gaffer made changes at the break and we were better in the second half, but we failed to score because they're a very well-organised side who defend very well. It's really tough when you go behind to teams like that.

'We'll have to talk about it tomorrow [Sunday] between ourselves. Besides yesterday's session, all 20 of us haven't trained together and with the international matches it's difficult to get everyone together to train, but that's no excuse.'