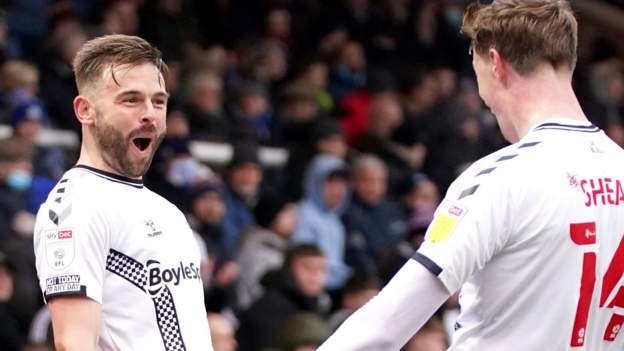 Coventry's Matt Godden scored 18 goals for Peterborough in 2018-19, his only season with the club

Coventry City picked up their first win in seven Championship matches with a dominant victory at lowly Peterborough United.

Gustavo Hamer put the Sky Blues ahead with a strike from about 30 yards, which home keeper David Cornell could only parry in, with former Posh striker Matt Godden doubling their lead with a composed finish inside the far post.

The visitors carved Peterborough open with regularity although Darren Ferguson's side halved their deficit before the break when Jorge Grant impressively found the top corner from just outside the box.

However, it was one-way traffic after half-time, Callum O'Hare and Jamie Allen hitting the post for Coventry before they were finally rewarded, Nathan Thompson diverting a cross into his own goal and Godden adding his second after a late counter-attack.

The points lift Coventry up to eighth, five points from the play-offs, while Peterborough - who have won just one of their past 10 in the league - remain 22nd and three points from safety.

Prior to the game the hosts had only conceded 11 home Championship goals this season, but they were worryingly flimsy at the back against Mark Robins' visitors, who clearly gained confidence from last weekend's FA Cup third-round win over Derby.

Peterborough signed Swansea goalkeeper Steven Benda on loan this week but the German watched on from the bench as Cornell ought to have done better with Hamer's long-range opener, though the Brazilian was given ample space to shoot.

Stand-in skipper Godden's first came after Max Sheaf dispossessed Bali Mumba in his own half, and Jamie Allen lifted a great chance over for Coventry before Posh pulled one back - Hamer caught out on the edge of his own area and Grant finishing in style.

O'Hare missed the best of the Sky Blues' second-half openings, somehow only prodding Todd Kane's fine cross against the post, but it did not matter as another Kane ball into the box went in off Thompson and sub Viktor Gyokeres later squared for Godden to score his 10th goal of the campaign.

Callum O'Hare (Coventry City) wins a free kick in the defensive half.

Jonson Clarke-Harris (Peterborough United) wins a free kick in the attacking half.

Attempt missed. Viktor Gyökeres (Coventry City) right footed shot from outside the box is close, but misses to the left. Assisted by Callum O'Hare following a corner.

Attempt missed. Jordan Shipley (Coventry City) left footed shot from the left side of the box misses to the right. Assisted by Michael Rose following a corner.

Attempt missed. Kwame Poku (Peterborough United) left footed shot from outside the box is just a bit too high. Assisted by Bali Mumba.

Attempt missed. Viktor Gyökeres (Coventry City) right footed shot from the centre of the box misses to the right. Assisted by Jordan Shipley.

Jake Clarke-Salter (Coventry City) wins a free kick in the defensive half.

Attempt missed. Matt Godden (Coventry City) right footed shot from the right side of the six yard box misses to the right. Assisted by Todd Kane with a cross following a corner.