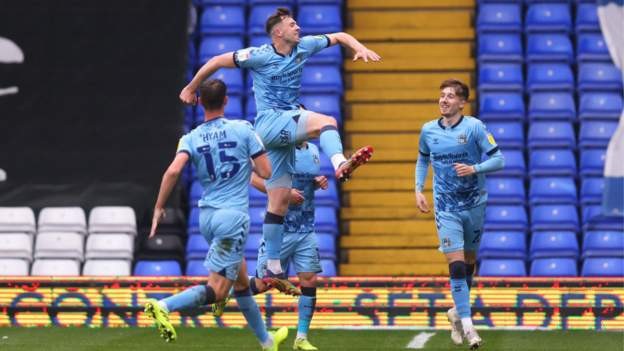 Coventry ended their temporary stay at St Andrew's in style, demolishing Millwall to record their biggest win of the campaign.

Jordan Shipley opened the scoring for the Sky Blues, who will return to the Ricoh Arena next season, before Kyle McFadzean made it 2-0.

McFadzean's second-half own goal gave the Lions hope, but Coventry put the contest beyond doubt with a further three-goal burst.

Dominic Hyam, Callum O'Hare and Matty James all found the net - and Tyler Walker iced the Coventry cake with a late sixth.

The result secured a 16th-place finish for the Sky Blues - their best in 15 years - while Millwall ended the season in 11th.

Coventry dominated the opening half an hour, with O'Hare a constant menace and the midfielder's incisive run set up the opener for Shipley, who collected his pass and rifled a left-foot drive in off the post.

However, McFadzean doubled the Sky Blues' advantage on the stroke of half-time, connecting with a James corner to volley down and into the top corner.

Millwall halved the deficit when McFadzean slid in and diverted Scott Malone's cross into his own net - but three further goals in the space of eight minutes snuffed out the visitors' hopes of a comeback.

Hyam finished off a close-range scramble to make it 3-1 and Shipley set up O'Hare, who chested down before firing in the fourth.

James netted Coventry's fifth, pouncing on a Bialkowski fumble, and then supplied the corner for Walker to deepen Millwall's misery five minutes from time.

Attempt missed. Maxime Biamou (Coventry City) right footed shot from the centre of the box is close, but misses to the left. Assisted by Matty James with a cross following a corner.

Josh Eccles (Coventry City) wins a free kick in the defensive half.

Attempt missed. Jake Cooper (Millwall) header from very close range is too high. Assisted by Scott Malone with a cross following a corner.

Kyle McFadzean (Coventry City) is shown the yellow card for a bad foul.

Jed Wallace (Millwall) wins a free kick in the attacking half.

Maikel Kieftenbeld (Millwall) wins a free kick in the defensive half.