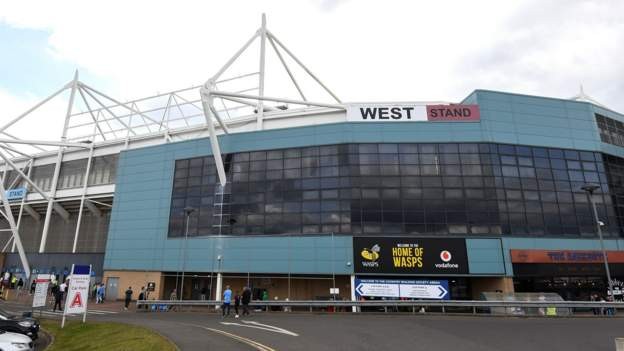 Coventry City's home Championship game against Rotherham on Sunday has been postponed because of an "unsafe" pitch.

The Coventry Building Society Arena has been used for rugby sevens matches during the Commonwealth Games.

The decision to call off the match was taken by a senior official following an 18:00 BST inspection on Saturday which deemed the surface "unplayable".

"Last season the condition of the pitch was highlighted as a concern," said Coventry chief executive Dave Boddy.

"We expected that this would be addressed by Wasps and the Arena, who are responsible for the pitch, over the summer - sadly this has not been the case, and this is the result of that, plus the large amount of use at the Commonwealth Games last week.

"I am seeking urgent talks with Stephen Vaughan, the chief executive at Wasps, and the Arena over the condition of the pitch, and expect immediate and significant improvements to be made to make the pitch playable as soon as possible."

A club statement said "promised investment by the Arena into a new pitch" had not materialised.

And the problems have been compounded by music concerts which have taken place at the stadium, as well as the Commonwealth Games fixtures.

Coventry are scheduled to stage a Carabao Cup game against Bristol City On Wednesday but no decision has yet been taken on whether or not that will go ahead.

Their next scheduled home Championship fixture is against Wigan Athletic on Tuesday, 16 August.

A statement by Rotherham said: "Whilst we are, of course, disappointed that the fixture will not go ahead as planned, we will always prioritise the safety of our players and understand the match officials' decision to postpone the game.

"We share the frustrations of our fans and apologise to those who had made travel plans to attend Sunday's match."