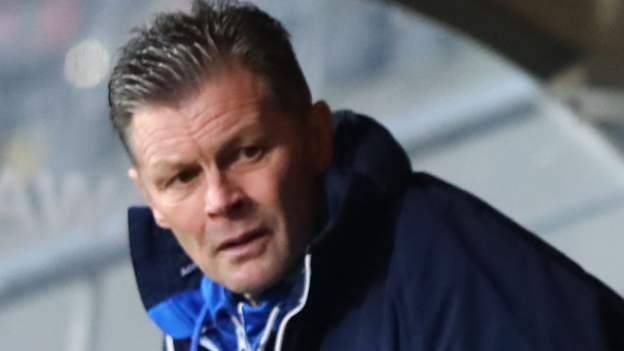 Shrewsbury Town manager Steve Cotterill has been readmitted to hospital as he is suffering from Covid-pneumonia.

Cotterill, 56, spent 33 days in hospital after being admitted with Covid-19 symptoms on 15 January.

After being released from Bristol Royal Infirmary, he was working from his Bristol home via phone and Zoom calls.

"He's been bad since the middle of last week. I could tell by his breathing and his coughing," said Town assistant manager Aaron Wilbraham.

Cotterill working from home by ZoomCotterill managing the club from hospital

"He was admitted to A&E on Sunday morning and then back on the ward with pneumonia, caused by Covid-19," he told BBC Radio Shropshire.

"It's a case of antibiotics and drips and another week in hospital.

"He's in the best place but I feel gutted for him. From all my time with him at Bristol City, I know he's the sort of bloke who never takes a day off.

"And, when he came to Shrewsbury, he was always in on a Sunday and a Wednesday when everyone else was off. It'll be killing him not being there.

'I've never known him have a cold or even a sniffle'

Wilbraham, who has been taking daily charge of the League One side in Cotterill's absence, added: "He's one of the toughest, fittest guys I know.

"Always on the bike. Always in the gym. I've never known him have a cold or even a sniffle.

"For him to have all this time off, then time at home, and now get this other setback is so hard on him. But I know how strong and tough he is. He'll deal with it, no problem.

"It happened in hospital too. Just when he felt he was getting somewhere he'd keep getting these setbacks.

"We keep telling him to relax, but it's very hard to tell a workaholic not to work too hard."

Shrewsbury are 17th in League One, 12 points off the play-off places but with games in hand, following Saturday's 2-1 defeat at Joey Barton's Bristol Rovers - their first defeat in five.