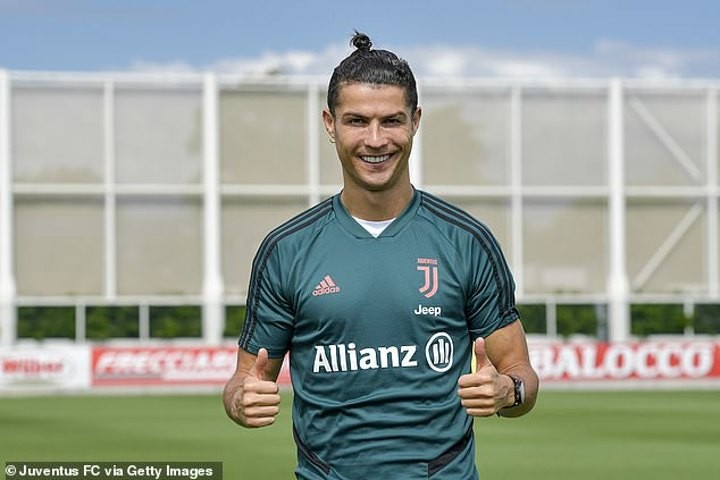 Cristiano Ronaldo has been lauded as football's answer to basketball icon Michael Jordan by a former team-mate who played alongside the Portuguese at Sporting Lisbon.

Rodrigo Tello played for the Primeira Liga club between 2000 and 2007 and regards Ronaldo, who made his first team debut in October 2002, as the ultimate athlete.

Ronaldo showed an exceptional work ethic to rise through the youth ranks at Sporting, becoming the first player in the club's history to represent the Under-16s, U17s, U18s and senior team in the same season.

The forward produced five goals and five assists in 31 games in his breakthrough season before sealing a move to Manchester United in the summer of 2003.

Ronaldo has gone on to win the prestigious Ballon d'Or award five times, and Tello believes the superstar was capable of cultivating a professional career in a variety of sports.

Tello told Portuguese newspaper Abola: 'Cristiano's mentality was totally different from that of a 17-year-old kid.

'He reminds me of (Michael) Jordan, competitive in everything.'

Now 35, Ronaldo is still making adjustments to make marginal gains and has taken to training in rugby studs to enhance his sprinting speed and flexibility.

He has also formulated a daily routine that includes six meals and five 90-minute naps to maximise fitness and recovery.

In a career spanning nearly 18 years, he has scored 626 club goals during spells at Sporting Lisbon, Manchester United, Real Madrid and Juventus.

In total, Ronaldo has won 32 trophies including two international competitions.