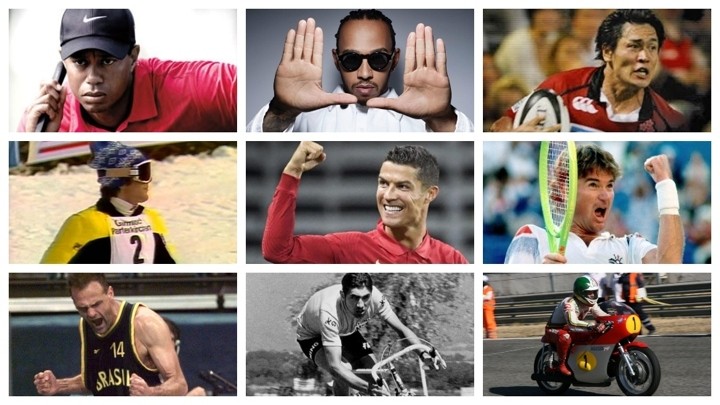 Cristiano Ronaldo is currently the second all-time top goalscorer in football history and is just two goals away from Josef Bican's record.

His goal against Sassuolo took his tally to 762, while Bican's record currently stands at 764.

It seems extremely likely that Cristiano is set to take the top spot in football's goalscoring charts. He does, however, have Lionel Messi breathing down his neck with a total of 718, and the Argentine could threaten his record as he's three years younger.

Every sport has that one unstoppable force who dominates in their chosen field. Here we take a look at some of the men who racked up the top numbers in their discipline.

Many people think that basketball's all-time top point-scorer is the legendary Kareem Abdul-Jabbar. The Los Angeles Lakers and Milwaukee Bucks legend sits in second place, however, with 38,387 points over his career.

In fact, it is Oscar Schmidt who sits top of the rankings with an incredible 49,737 points to his name.

The holder of the record for most matches won in professional tennis is Jimmy Connors. The American, who surprisingly holds just three Grand Slam titles, won 1,274 matches.

Federer and Nadal are still playing and could eventually overtake Connors. It will be a difficult task, though, with Federer set to retire in 2021 and Nadal with a mountain to climb in the last few years of his career.

Ice hockey legend Wayne Gretzky is the top scorer in his sport with 894 - a record which hasn't been beaten since he retired in 1999.

When discussing the top players in NFL history, there are two types of record.

Drew Brees currently holds the record for most touchdown passes with 564 after eclipsing the legendary Tom Brady.

The other record is the number of touchdowns scored, which is held by legendary San Francisco 49ers wide receiver Jerry Rice, who has scored a total of 197 over his career.

Two players hold the record for most PGA Tour tournaments won, with both Tiger Woods and Sam Snead sitting on 82 each.

Woods does have the opportunity to pull away from Snead, however, as he is still currently playing on the Tour.

The world of cycling is dominated by Eddy 'The Cannibal' Merckx.

Merckx ended his career with an incredible 64 victories in the sport's major events: 34 at the Giro d'Italia, 24 at the Tour de France and six at the Vuelta de Espana.

Last season Lewis Hamilton overtook Michael Schumacher as the driver with most F1 victories with 95 in total.

The German sits in second place with 91 and Sebastian Vettel in third with 53.

Fernando Alonso is in sixth position for 32 wins, behind Alain Prost (51) and Aryton Senna (41).

Giacomo Agostini is the top dog in the MotoGP world having won 15 World Championships, accumulating 122 victories along the way.

Valentino Rossi, who is still actively racing, sits in second place with 115 wins.

Fin Ari Vatanen holds the current record for Dakar victories with a total of 50, with Peterhansel in second place with 47, followed by Al Attiyah (41) and Carlos Sainz (39).

Barry Bonds boasts the most-ever home runs in baseball history with an almost inhuman tally of 762. Hank Aaaron (755) and Babe Ruth (714) occupy the places behind him.

Ingemar Stenmark was incredible over his 15-year skiing career, notching a total of 86 victories.

Austrian Marcel Hirscher, who retired in 2019, is second in the rankings with 67 victories.