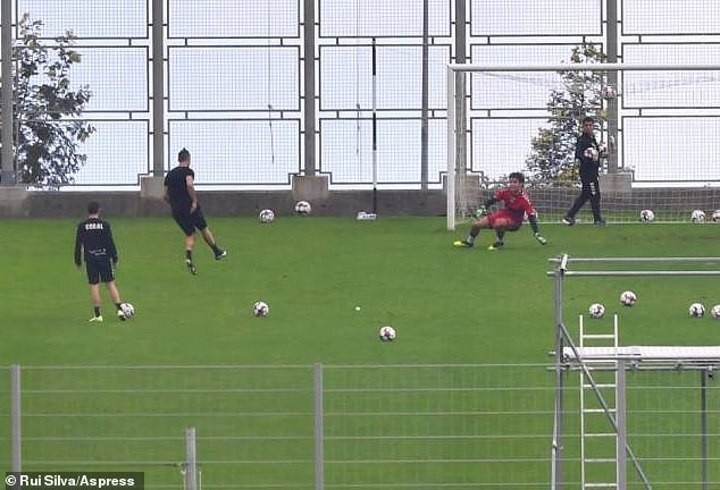 Cristiano Ronaldo has been warned he has 'no privileges' in the coronavirus lockdown as images have emerged of him in a secret training session at a Madeira stadium.

The Juventus star trained at the Madeira national stadium, home of club CD Nacional, in Funchal on the Portuguese island this week.

But government chiefs are adamant that Ronaldo is no exception as the public have been urged to stay at home during the Covid-19 pandemic.

'Cristiano Ronaldo has the right to train as long as he respects the rules like all citizens: there is no privilege.'

Images of Ronaldo playing football at the stadium that surfaced have sparked controversy and resulted in government officials being quizzed on it.

In the press conference Ramos went on to state that his exercise was not breaking any lockdown rules.

'All citizens can leave the house and do so, as long as they do not cause gatherings and maintain a safe distance during the exercise. Therefore, Ronaldo did what we have seen.

'There was no special authorisation because we are all the same, we are all facing the same pandemic.

'The best player in the world must use his image to set an example, but Cristiano seems to me to have done just a few minutes of exercise and, therefore, there is no harm in the world.

'I would not like it to be said that it is trivialisation, because we are all responsible.

'All Madeirans are complying with the rules of the regional government. And those who do not know that the forces of authority can exercise their power.'

Ronaldo was one of a number of Juventus players allowed by the club to return home amid the crisis.

The 35-year-old has decided to change his setting during the lockdown, opting to stay in a £3,500-a-week rented home in a quiet fishing village in Madeira.

After nearly a month on the island, he has decided to leave his £7m seven-storey home and relocate to the place he grew up as he looks for more privacy for him, his partner Georgina Rodriguez and the rest of his family.

Ronaldo has regularly updated his 211 million followers on Instagram about his recent activities with football indefinitely suspended.

He uploaded a video of himself and his girlfriend working out at home earlier this week.

During the enforced break from football, Ronaldo has also invited fans to attempt the 'core crusher challenge' after he shared a clip of his incredible 142 reps in just 45 seconds.