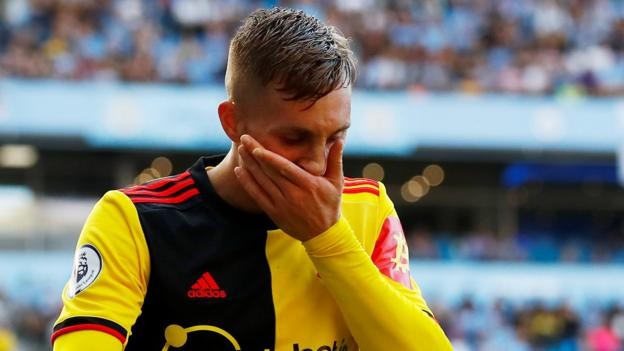 Watford's heaviest ever defeat in English league football - at the hands of an irresistible Manchester City - prompted harsh words from pundits, their own players and manager.

Some said they "surrendered" after conceding on 52 seconds, on their way to the 8-0 hammering. Their experienced goalkeeper Ben Foster simply said City were "without doubt" the best team he had ever faced.

By the time 18 minutes had elapsed, City were 5-0 up - a goal rate that could have taken them past 25-0 by full-time. Their scoring slowed, but Watford's players may shudder at the thought of facing the Premier League champions again, having now conceded 33 times in seven meetings.

Pep Guardiola praised the quality of his side's attacking players for ruthlessly running in early goals, although the home side did survive something of a scare at 1-0 when Gerard Deulofeu went close to equalising.

Watford paid for the miss, and by 18 minutes had conceded five goals faster than any side in Premier League history.

"Its probably a bit of shock, embarrassment," reflected Watford goalkeeper Foster afterwards. "As a keeper coming to City and Liverpool, if you let five in in 20 minutes, you fear the worst, you think cricket scores.

"They are without doubt the best team I have ever played against. We were poor, didn't lay a glove on them, but at times it was breathtaking watching them.

"You come away to City and, I'm not joking, you come here and think, if you keep it to two or three... they are so good. Them and Liverpool are a different level.

"We didn't do our job today. I think we let ourselves down today and the fans a bit. The fans were giving it everything, all they've got. Unfortunately we on the pitch didn't give it all we have got."

Time for a whip-round

Match of the Day's Alan Shearer said: "You can't go into a game and stand, watch and admire these Man City players. They [Watford] were pathetic today and should be embarrassed with that performance."

Chris Waddle, speaking on BBC Radio 5 Live, added: "The Watford players have let their club down today. That was absolutely embarrassing. We know how good these Manchester City players are, but they didn't get anywhere near them.

"They should be having a whip-round in the dressing room right now to pay for their supporters' travel. They surrendered after 52 seconds."

And Match of the Day presenter Gary Lineker referred to the precarious position of Watford's old manager Marco Silva at Everton after they lost at home to Sheffield United. Lineker tweeted: "The way things are going Marco Silva could be managing Watford by Monday."

Statistician Duncan Alexander pulled out a piece of trivia for Twitter

As the goals flew in, one BBC Sport reader tweeted that City should "declare". Few players had a worse day than Watford's Premier League debutant Dimitri Foulquier, who left the pitch after 32 minutes, having had nine touches and with his side 5-0 down.

The Hornets have now lost 8-0 and 6-0 twice to City in the last three seasons. Such was this latest battering, some shared social media memes of people running away from a stampeding elephant to illustrate how Watford's players may feel about the prospect of the return fixture on 9 May.

"We looked a little scared at the start of the match, but we will learn a lot," said manager Quique Sanchez Flores. "We just need to say sorry for the fans.

"If you say Manchester City and add mistakes, it's very dangerous. Every single goal is coming for different reasons - a cross, a penalty, a quick bit of play, different scenarios. You can't say what the problem is because it was a big problem. It was difficult to stop the scenario."

Flores masterminded a comeback from 2-0 down to 2-2 against Arsenal last week in what was his first game in charge since returning to the club. He could be forgiven for thinking he had momentum.

On the plus side for his players, they can draw comfort from the fact he will not be resorting to old-school punishments. "The world has changed from the days where you would send players for a run in the forest after a game like this," he added.

It could have been worse...

As Nicolas Otamendi turned in City's fifth, some were wondering whether they would overhaul the Premier League's biggest ever win, when Manchester United thumped Ipswich 9-0 in 1995.

When Kevin de Bruyne fired home an eighth with five minutes remaining, the chase was on for City to put their name - and Watford's - in the history books.

De Bruyne himself fashioned a clear-cut opening at the death, with the goal gaping and only Foster to beat, only to pull his effort wide from 12 yards.

It was the final action in a chastening day for Watford - but at least the punishment stopped short of topping the record books.