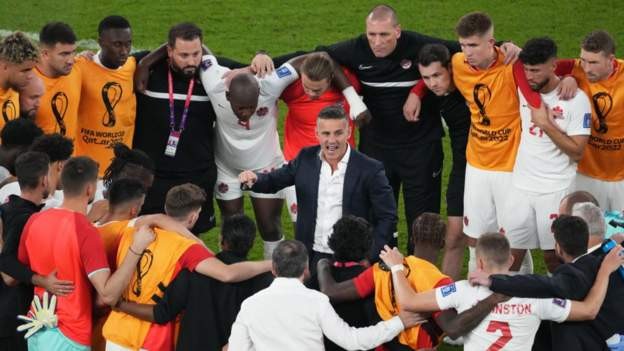 Croatia boss Zlatko Dalic has said his team deserve respect as World Cup runners-up, after Canada's John Herdman used an offensive phrase to gee his own side up for Sunday's group match.

After Canada lost 1-0 to Belgium in their opener, manager Herdman said: "I told [the players] they belong here and we're going to go and eff Croatia."

Herdman has since apologised.

"The way of putting these words together is not respect," said Dalic, whose side lost the Russia 2018 final.

"We are runners-up, we are worthy of respect… I shall not focus and comment on other people's comments.

"We respect everyone equally, so we expect our opponents to do the same."

A tabloid newspaper in Croatia printed a full-page photo of a naked Herdman with maple leaves covering his mouth and private parts alongside the headline: "You have the mouth, but do you have the balls as well?"

Croatia are tied with Morocco on one point in Group F, where Belgium are leaders on three points and Canada bottom with none.

Croatia's Nikola Vlasic had to come off at half-time against Morocco because of a calf problem and is considered a fitness doubt.

If he's not available, then one of Lovro Majer, Mario Pasalic or Mislav Orsic is likely to deputise.

Canada have no reported new injury concerns and Atiba Hutchison is set to become the first man to win 100 caps for the country.

Alphonso Davies and Alistair Johnston are both one booking from a ban.

Canada are a bit like the USA in that they play front-foot football and are exciting to watch but can find themselves being picked off by teams who are willing to wait for them to blow up.

They might get some joy here though. Croatia are not exactly free-scoring and are not the team they were when they reached the final four years ago.

Croatia's only defeat in their past 17 games was by 3-0 at home to Austria in the Nations League in June (W11, D5).They failed to progress beyond the group stage at all three previous World Cups when they didn't win their opening fixture.Canada have lost all four of their World Cup matches. They are also yet to score despite 50 attempts on goal across those games.The Canadians could become only the second nation to fail to score in their first five World Cup fixtures, emulating Bolivia (1930-94.