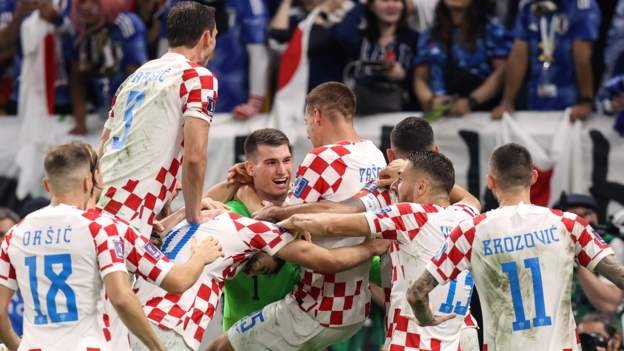 Japan were once again on the verge of the World Cup quarter-finals but Croatia's nous and experience got them over the line on Monday.

Japan boss Hajime Moriyasu masterminded shock victories over Germany and Spain to top their group and they pushed the finalists from four years ago all the way to penalties.

But, having captured the adoration of those watching with likeable fans who chant and bang their drums all game, it was another tournament that ended in heartbreak.

This time, they suffered agony in the shootout.

"We could not break through the round of 16 and could not see a new landscape," said Moriyasu. "We won against Germany and Spain who have been champions.

"The players showed a new era of Japanese football and they should use this feeling of being upset to try to win next time."

In the shootout, Takumi Minamino, Kaoru Mitoma and skipper Maya Yoshida all saw their efforts saved by Dominik Livakovic, with Takuma Asano the only one successful.

Former England captain Alan Shearer said on BBC One: "It was so frustrating from a Japanese point of view, it was like they have never practiced penalties, it looked that way. It was too big for them.

"The Japan penalty takers looked so casual. All three of them, I don't think any of them struck them as hard as they wanted to."

Ex-England midfielder Jermaine Jenas added: "That Japan side will be devastated. They put absolutely everything they had into it but the experience of Croatia - they've been there done it, been in penalty shootouts."

Defeat means Japan have now been eliminated in the last 16 in all four of their appearances at that stage in World Cup finals.

Croatia unconvincing but can call on experienced heads

Croatia fell behind to Daizen Maeda's opener, but equalised in the second half through Ivan Perisic's superb header into the bottom corner.

With 10, Tottenham's Perisic, 33, has now scored more World Cup and European Championship goals than any other Croatia player, and is the first to score in five different major tournaments.

He shone alongside Real Madrid's pass-master Luka Modric, Chelsea's Mateo Kovacic and Inter Milan's Marcelo Brozovic, who completed 130 of his incredible 142 passes in the match.

Boss Zlatko Dalic said: "We had a difficult match against the feisty and aggressive approach of an exceptionally difficult opponent.

"We could not be dominant and created counter attacks in the first half. We stabilised in the second half and showed strength of character.

"We are diligent, hardworking and fight for what we want, especially this generation who don't give up.

"They reflect the spirit of our people, we have been through so much pain so the national team is pride for everyone. We bring them faith in a better tomorrow."

Meanwhile, Livakovic became just the third goalkeeper to make three saves in a World Cup penalty shootout after Portugal's Ricardo against England in 2006 and compatriot Danijel Subasic against Denmark four years ago.

Jenas said: "What a big moment from Livakovic. He made some big big saves to take his country into the quarter-finals."

Dalic added: "On Sunday we practiced penalties in training and he made several important saves. I trusted in him, he filled me with confidence."

Former Denmark goalkeeper Peter Schmeichel said on BBC Radio 5 Live: "I am just thinking of the way Brazil have been playing and the players they have - I am not sure if Croatia have much chance against them.

"Brazil are far too superior, fair play Croatia but they have done it on the narrowest of margins today [Monday]."