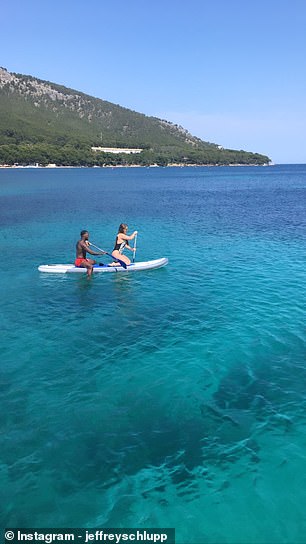 Crystal Palace defender Jeffrey Schlupp has been enjoying a break in holiday with his girlfriend Amy Jackson in Mallorca.

The 23-year-old did not make Ghana's squad for the 2019 Africa Cup of Nations due to injury.

The ankle setback meant he will miss the continent's flagship football tournament in Egypt this summer.

But the defender has been enjoying his summer break by traveling to Spain's Balearic Islands in the Mediterranean to hang out with his girlfriend.

The pair were seen sit-down paddle boarding on Schlupp's Instagram story while the midfielder was also pictured enjoying a beer on a yacht.

After over a year on the international wilderness, a series of fine performances at club level earned the versatile player a recall for games against Kenya and Mauritania earlier this month.