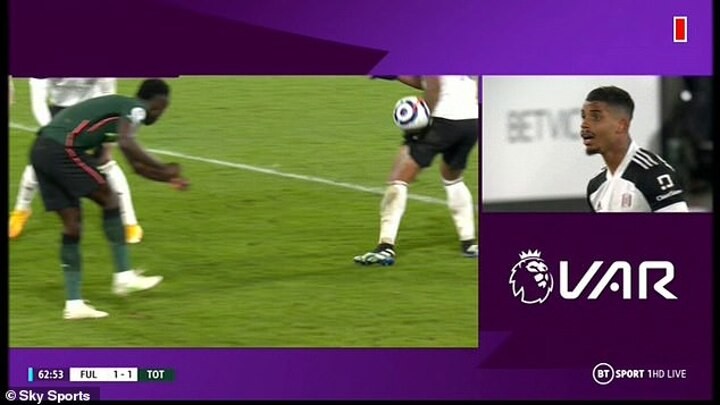 Peter Crouch led a series of tweets criticising VAR's decision to controversially rule out Fulham striker Josh Maja's equaliser in their 1-0 home defeat by Tottenham due to handball against Mario Lemina.

Nigeria international Maja thought he had levelled things up in the 62nd minute after squeezing a shot past Hugo Lloris, with Tosin Adarabioyo's first-half own goal having given Spurs the lead.

But Maja only received the ball after Tottenham centre-back Davinson Sanchez had tried to clear the ball, but that was blocked by midfielder Lemina.

And following subsequent checks and consultation with VAR, referee David Coote overturned the goal after the ball from Sanchez's clearance was shown to have struck Lemina's arm - albeit from a short distance away - much to the surprise of former Spurs striker Crouch and fans similarly left aghast.

Crouch tweeted: 'Hands by your side is handball as well now ?! Ok,' followed by a grimacing emoji.

Others were far more indignant, with one Twitter user stating: 'What on earth can Mario Lemina do there? The ball just come and hit his hand which was in it's natural position. This is getting ridiculous now!!!'

Another agreed that Lemina was helpless in the situation, adding: 'These rules are ridiculous, it’s not even borderline anymore. What is Lemina supposed to do there? Change the handball rules and stop killing the game.'

Another supporter meanwhile was left raging that VAR had not intervened for Spurs' goal, adding: 'The game is gone. The laws state that is giving an advantage for us in regard to the Lemina handball.

'But you're telling me Kane in an offside position isn't influencing Tosin for their goal. These rules and VAR can just get in the bin.'

Others were similarly frustrated at techonology's intervention, with one stating: 'VAR in the mud again. That Fulham handball decision was disgraceful,' while another added: 'That handball against Fulham is probably the worst call I've seen all season. Game's gone fr.'

The handball rule has already been changed this season, but one called for another review, stating: 'Handball rule needs to be changed if that’s lead to VAR overturning the Fulham goal.

'The Spurs player kicks the ball against the Fulham player from under five yards. So clearly there won’t be any realistic human reaction to move his arm.