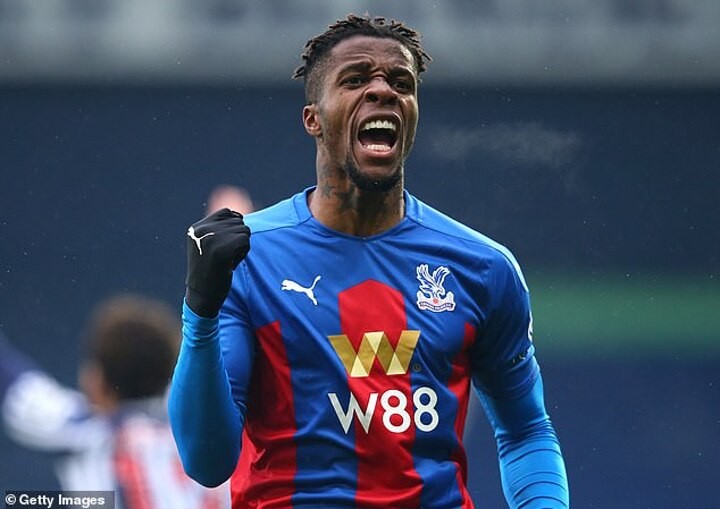 It could have been oh so different for Wilfried Zaha heading into tonight's Premier League battle between Arsenal and Crystal Palace.

The Eagles talisman has long been linked with a move to the Emirates, but will once again occupy a spot in the away dressing room when Palace arrive at the stadium, pulling on his boots as he takes last-minute instructions from Roy Hodgson.

Mere metres away, Mikel Arteta will deliver a tactical briefing of his own, knowing full well that the main attacking threat of his opponents could quite easily have been wearing the red and white of his own team.

By his own admission, Zaha has been 'very close' to a move to Arsenal in the past, before the club's hierarchy opted instead to sign Nicolas Pepe in the summer of 2019.

The jury is still out on whether he was worth the £72million they paid (and that might be putting it kindly), but many are now confident in their opinion that Zaha would have been the better buy.

Both Ivorian, both valued at a similar amount, and Arsenal's board lumped on the then-Lille man instead of Zaha. A flip of a coin in some respects, but it turns out Ligue 1 is not the Premier League, and Zaha is still flying high.

This season, the money men at Arsenal will have been watching on with some envy at the incredible season Zaha is having with Palace.

Despite the team being far from impressive in recent weeks, Zaha is thriving in his new central position, regularly moving away from his spot on the left wing to occupy a centre-forward role alongside a rejuvenated Christian Benteke.

After years of pundits urging him to add goals and assists to his game, he is now enjoying the most successful season of his career, fully hitting his peak with eight goals and two assists in his first 15 league matches.

And because of the shift in position, it is not enough to just compare him to Pepe. Indeed, the likes of Pierre-Emerick Aubameyang, Alexandre Lacazette and Bukayo Saka all need to be rated alongside Zaha, and the Palace man blows every single one out of the water.

In terms of goals, his eight is better than each Arsenal man, with Lacazette the closest to him with seven. The Frenchman, though, doesn't have any assists so Zaha stretches further clear of him in terms of goal involvements.

Elsewhere, Aubameyang and Saka have three goals apiece, while Pepe himself has just two in his 11 Premier League matches this season.

Onto assists and only Willian beats Zaha's two - the former Chelsea man has three, but can't claim to have scored a single goal so far this season.

Zaha has had 92 touches in the opposition box this season, no mean feat given Palace's tendency to sit back and play on the counter attack.

Arsenal, of course, you would expect to enjoy much more potency in their opponents' half, but the reality is that none of Arsenal's front line gets close to Palace's superstar.

Saka is the closest with 72, while Aubameyang has 62 and Lacazette 59.

Onto 'dribbles completed', a metric Zaha in which will perhaps have expected to fall down the pecking order slightly, given his new role through the middle.

He is no longer picking the ball up inches from the touchline and driving past his opponents on the wing, but still he easily eclipses every Arsenal man again.

Zaha has 26 successful dribbles - that is, times he has beaten his man - with all bar one Arsenal attacker still in single figures.

While Saka has 24, a total close to Zaha, Aubameyang, Lacazette, Willian, Eddie Nketiah and Pepe have six, nine, eight, six and eight respectively.

The most harrowing part of this for Arsenal fans is that Zaha actually wanted to play for them.

He is a man who idolised Thierry Henry growing up, dreaming of pulling on Arsenal's kit and banging in the goals for the north London giants.

Back in 2019, when Unai Emery was the manager, he was wanted by the club and he wanted the move. It all looked on until the Gunners board stepped in.

'I had a conversation with the manager. [Unai] Emery was just like, "We don't really need to go through much",' Zaha said recently on Jamie Carragher's podcast.

'He said he'd seen me play, he knows I can change games at any time and stuff like that. He was like, "Yeah we'd love to have you", and I was just like, "Yeah I'd love to come".

'The conversation was rather straightforward because I played against him when he was manager of Arsenal. He saw what I could do, saw my work-rate, and what I could add to the team.

'Obviously, it was up to the club who they chose and they chose Pepe over me.'

All credit to Zaha in his response to the knock-back, though. He has fully knuckled down at Palace, well aware of the love and support the fans and club have given him, and moved on to the next level.

In a Hodgson team renowned for their structure and rigidity, he is the free-flowing attacking talent that the fans pay to see.

A club legend with nearly 400 appearances under his belt, a fans' favourite more than ever before in his 11th season in red and blue.

Going into tonight's game, Zaha more than most will be aware of the comparisons being made between himself and the Arsenal players. And he will be aware that he is eclipsing them in almost every area.

What better motivation could there be for him than to prove it inside the stadium at the Emirates once more. A victory for Palace would see them leapfrog Arsenal in the table, too.

During Arsenal's season of struggle, Zaha will be desperate to show them once again what he can do. Mikel Arteta, here's what you could have won.