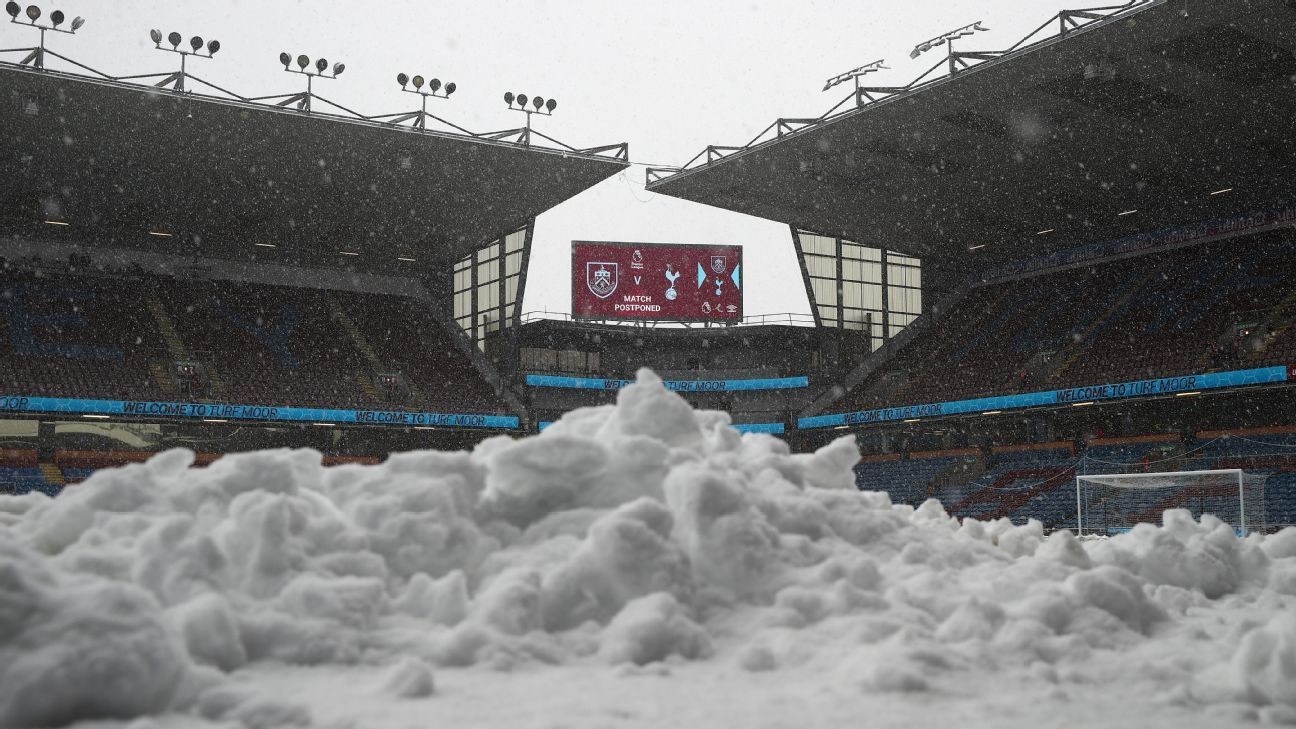 Tottenham's Premier League match at Burnley was postponed with less than an hour until kickoff, once all the travelling fans had arrived. Chris Brunskill/Fantasista/Getty Images

While it's always disappointing when a match is postponed, you have to spare an extra sympathetic thought for the Tottenham Hotspur fans who travelled all the way from the United States to watch their side play Burnley on Sunday, only for the Premier League game to be snowed out less than an hour before kickoff.

There were definite shades of some of the great ill-fated fan voyages of modern times, like the hapless Liverpool fans who failed to reach a Champions League trip to Belgian side Genk after mistakenly plotting a course to the city of Gent, 100 miles in the wrong direction.

And perhaps the duo from Texas should have heeded the cautionary tale of the France fans who conspired to miss their national team play a Euro 2020 match in Budapest, the capital city of Hungary, after flying out to the Romanian capital of Bucharest by mistake.

The pair of intrepid Spurs supporters made a mammoth 31-hour trek from Dallas to Turf Moor, arriving in Burnley on Saturday evening, only for a heavy blizzard brought on by Storm Arwen to descend upon the stadium the next day.

Dallas to London to Burnley (almost there) 31 hours - no sleep - fueled by coffee, cheese crackers and more coffee. Frigid temps and snow predicted for match day. The things we do when you love your club @SpursOfficial #coys #thfc #snowmatch pic.twitter.com/4784qLL4hy

Anticipation was mounting for the couple as they approached the ground via rail, though the temperature had already begun to dip toward freezing up in the northwest of England, around 30 miles from Manchester.

Still the skies were clear during a prematch stroll around the town. Unfortunately, just as they got to Turf Moor, the first heavy, wintery flakes began to sweep in.

Just having a stroll around Burnley this crisp morning #BURTOT #COYS pic.twitter.com/g7w9zj4vEa

Yup, just had a [email protected] a few neighbourhoods in Burnley and it's coming down good https://t.co/P0on1WQyGN

Inside the ground, Burnley's famously rugged manager Sean Dyche remained undaunted and refused to be beaten by a minor spot of inclement weather, venturing out to inspect the pitch while wearing a thin white shirt.

Burnley's ground staff gave it their best shot at clearing the pitch in time for the kickoff, at 2 p.m. local time. However, despite their efforts, the match was cancelled at short notice.

❄️ We can confirm that today's match against Burnley has been postponed due to adverse weather conditions. pic.twitter.com/8azBGHf3Pl

Thankfully, all wasn't entirely lost for the U.S.-based Spurs fans who had travelled 4,500 miles to attend a game so cruelly scuttled by a late-November whiteout. After all, if all else fails, there's always the pub.

Appreciate all the love but make no mistake. Hanging with some outstanding mates @vickijukes and others....THIS is what footballs all about #becausefootball #coys

Tottenham's players tried to make the best of their disappointment -- although, coming off the back of Thursday's shock loss at Slovenian minnows NS Mura in the Europa Conference League, maybe they weren't super-keen on making the freezing trip to Burnley anyway.

Brazilian winger Lucas Moura tried to get a snowball fight going, although even he was left to complain about the ice-cold temperature.

Spurs head coach Antonio Conte also had his say on the matter, though why Tottenham felt the need to deliver their manager's comments as though he was launching his own menswear range is anybody's guess.

The boss has his say! ? pic.twitter.com/mFgt4KNffC

The delicate, seasonal frosting in Conte's hair is just the icing on the cake.