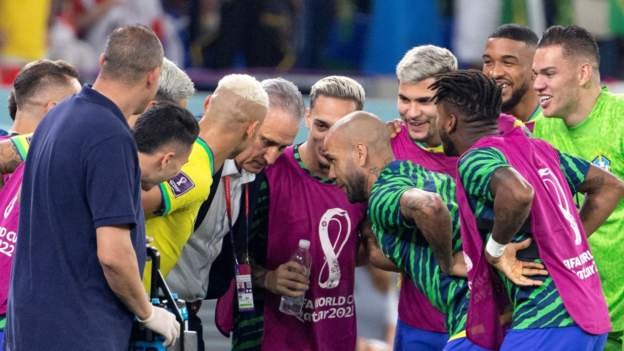 Brazil coach Tite says he will not apologise to those who "do not know Brazilian history and culture" after criticism of his players for dancing after scoring goals at the World Cup.

Tite, 61, even joined in with the celebrations during the 4-1 win over South Korea in their last-16 match.

"It is a connection I have with the younger generation - they could be my grandchildren," he said.

"If I have to dance to be connected with them I will continue to dance."

Speaking before Friday's quarter-final against Croatia, he added: "I'm not going to apologise when it's our culture to dance and have fun."

Brazil forwards Vinicius Junior and Neymar both led orchestrated dance moves after scoring the opening two goals against South Korea, with Richarlison running over to the bench and beckoning his manager to join in following the third.

Former Republic of Ireland captain Roy Keane was not impressed and said he thought the moves were "disrespectful" towards South Korea.

Tite rejected those accusations and says he has a responsibility to preserve the identity of Brazilian football.

"I will not make comments on those who do not know Brazil history and culture like we do," he said.

"I want my connection to be to the people who I relate to, who know how much I respect our history, they are the ones who I give my heart to.

"There might be lots of kids who dance because that is what Brazilian culture is when a goal is scored. That's not being disrespectful to anyone else - that's what we do, that's us.

"We will continue to do things in our manner."

Brazil coach Tite's biggest concern seems to be at left-back. Alex Telles was injured early in the tournament, while Alex Sandro picked up a hip injury in the group stages and missed the last-16 tie against South Korea, with his Juventus team-mate Danilo deputising instead.

In his news conference on Thursday, Tite said 31-year-old Sandro would take part in training on Thursday and "then see if he can play".

'No-one has gone toe to toe with Brazil'

I've worked as a co-commentator for BBC Radio 5 Live at all four of Brazil's games at this World Cup, and no team has really gone toe to toe with them yet.

Each of their group games started with teams sitting in - defending deep with a low block - and two of the three teams they played, Serbia and Switzerland, did not manage a shot on target.

The difference when they played South Korea in the last 16 was that they scored an early goal in a knockout tie, which opened the game up - and it was 3-0 and over before the half-hour mark.

Having Neymar back from injury definitely helped Brazil in that match, and they made a bit of a statement with the manner of their victory.

Croatia will play with balance, rather than massed defence - but they certainly won't be on the front foot.

They have got some good players - young and old - but Brazil will be too strong.

Brazil have never lost in four previous meetings with Croatia in all competitions (winning three and drawing one)Croatia have lost four of their five World Cup games against South American sides, with the exception being a 3-0 win over Argentina in 2018Since beating Germany 2-0 in the 2002 final, Brazil have lost each of their past five World Cup knockout stage games against European nationsIn a run going back to Euro 2008, seven of Croatia's last eight knockout stage games at major tournaments have gone to extra time and they have progressed from all four such games at the World Cup - three via penalty shootout.