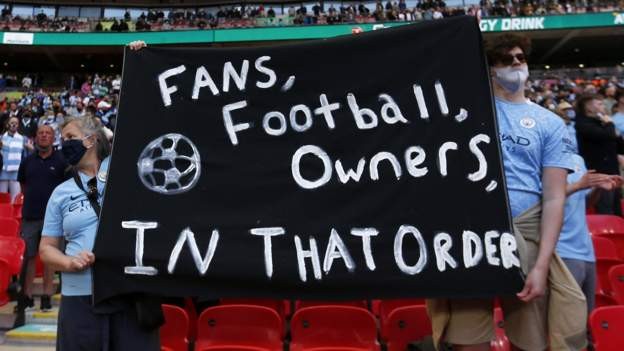 The dangers facing English league clubs are "very real", with key aspects of the nation's game "at genuine risk", says the chair of a fan-led review commissioned by the government.

This includes an independent regulator to "protect the future of our game".

The review has heard over 100 hours of evidence from fans, the Football Association and clubs at all levels.

"The evidence has been clear that football clubs are not ordinary businesses," wrote Crouch. "They play a critical social, civic and cultural role in their local communities.

"They need to be protected - sometimes from their owners who are, after all, simply the current custodians of a community asset.

"Key aspects of our national game are at genuine risk. The short-lived threat of the European Super League jeopardised the future of the English football pyramid.

"While that threat has receded - for now - the dangers facing many clubs across the country are very real with their futures precarious and dependent in most cases on the willingness and continuing ability of owners to fund significant losses."

The measures proposed by Crouch include:

A new independent regulator to address issues that are most relevant to the risks to the game, especially financial regulation, corporate governance and ownership.Greater protection for important club assets such as badges, location and colours, through a 'golden share' for supporters that provides them with veto powers.Further investigation over the summer on revenue flows within the football pyramid, including 'parachute payments'.Allowing clubs to operate all-weather pitches in League 2 to help with generation of revenue in lower leagues.Suggestion that the English Football League (EFL) enter discussions to absorb the National League top division into the EFL structure.

The review was promised as part of the Conservatives' 2019 General Election manifesto and commissioned early after the foundation and swift collapse of the Super League in April.

Gold Rush: How Britain's Olympic dreams were rebuilt after a disappointing 1996An exclusive BBC News special: Dominic Cummings on his role in Brexit, the pandemic and the government