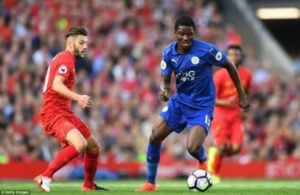 Ghana defender Daniel Amartey is pushing for an exit from the club having been relegated from the first team after recovering from a broken leg.

Amartey is aware that his chances of playing for the first team under Brendan Rodgers are next to nothing despite being one of the best players in training since the turn of the year.

The former FC Copenhagen man broke his leg a year ago whiles playing for the club against West Ham in the Premier League, in his absence, Nigeria international Wilfred Ndidi has become one of the best holding midfielders in the league, making it difficult for the Ghanaian to have a chance in midfield.

Northern Irish international, Johnny Evans has been bought and he’s formed a formidable defensive partnership with Turkish international Caglar Soyuncu. Captain Wes Morgan has been relegated to the bench leaving Amartey clutching on straws to even make the match day squad.

He’s situation is dire given he’s popular amongst his colleagues and was a member of the team before the tragic night he broke his leg which happens to be the same night club owner Vichai Srivaddhanaprabha died in a helicopter crash at the King Power.

The 25-year-old's predicaments is the painful reality of modern day football, where clubs no longer have time for players to heal and are quick to discard them at the first sign of discomfort.

Leicester are 3rd on the Premier League table having exceeded expectations and take on Wolves in their next game.