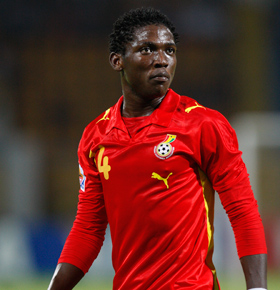 Ghana defender Daniel Opare says Â he has adjusted to life as a make-shift left-back for the Black Stars.

The Standard Liege right-back was re-assigned to the left to solve the team's problematic position.

The former Real Madrid youth player excelled in that role in March against England at Wembley and was exceptional in a Nations qualifier against Congo at home in June.

Opare says he is capable of thriving in that unfamiliar role.

"I am a right back and I think it is very similar to the left-back position, as a player I think it is a plus if you can play more than one position," he exclusively told GHANAsoccernet.com.

''I use to slot in to the left back position at my club side whenever the person there gets injured or red-carded so I am very comfortable playing there.''

Ghana have struggled to find a natural left-back since Habib Mohammed faded out after the 2006 World Cup finals.