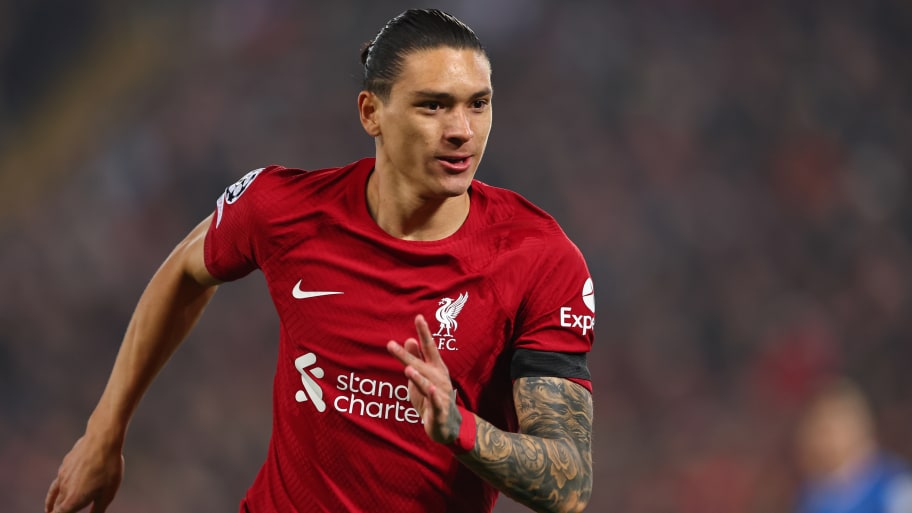 Darwin Nunez has opened up on a tough start to life at Liverpool following his summer move from Benfica, admitting he's had to calm his nerves in games to avoid making mistakes on the pitch.

The 22-year-old signed for Liverpool in a deal worth up to £85m with add-ons after a wildly prolific breakout season for Benfica. But despite bagging in the Community Shield against Manchester City straight off the bat, he has endured a patchy start to his career in England.

Nunez was sent off in Liverpool's first home game of the season against Crystal Palace, receiving a three-match ban as a result, which has contributed to a shaky period that has lacked goals.

He did lead the line for the Reds in their 2-0 Champions League victory over Rangers on Tuesday, though, and put in an improved performance even though he was unable to score.

Speaking to TNT Sports Brazil, Nunez confessed: "The truth is that it was a little difficult to adapt but I believe that, as training and games go by, I will adapt little by little.

"[After the red card] was a very tough time. I was suspended for three games, I know I made a big mistake and now I’m aware that it won’t happen again," he added, before explaining his emotions: "I have to calm my nerves during the games, talk less.

"We all make mistakes and I know it will serve as a learning experience."

Discussing what he can bring to the team, Nunez was confident in his abilities: “The important thing is to leave my mark on the team, someone who can always contribute by playing well and, if I don’t score, I have to be calm.

"When the first one goes in, more will go in. I’ve been through [goal droughts] and it’s a little uncomfortable because, in the end, as forwards we live on goals.

"But I’m calm, the coach has always supported me. My teammates also support me at all times and I will always try to help the team by scoring goals or, even without a goal, try to help the best I can."

This article was originally published on 90min as Darwin Nunez admits he must 'calm nerves' after difficult Liverpool start.