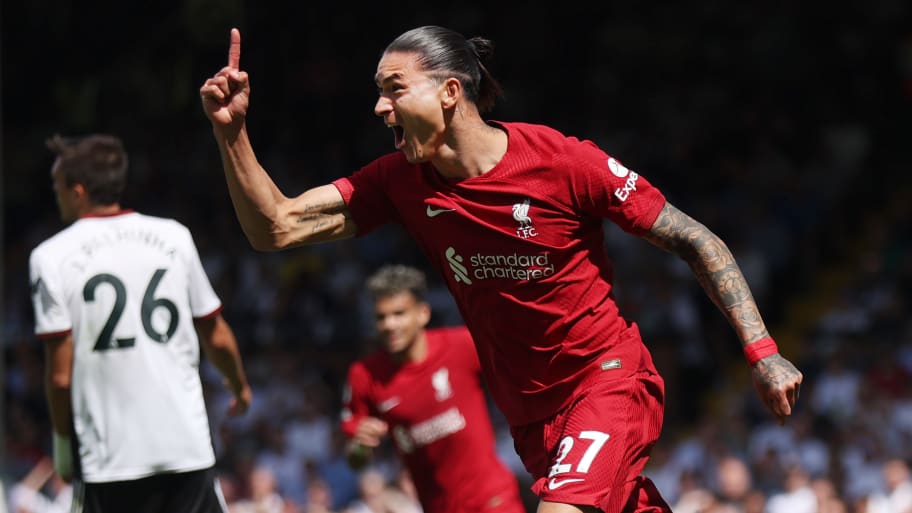 Jurgen Klopp made the decision to keep summer signing Darwin Nunez on the bench for the start of the Premier League season.

"Darwin needs time to settle and we need to mix it up a bit," Klopp said before kick-off. "Bobby [Roberto Firmino] is a baller."

By the end of Saturday's 2-2 draw, you can guarantee Klopp wasn't convinced by either of those statements.

Nunez watched on from the bench in the first half as Liverpool were absolutely hammered by newly promoted Fulham, whose energy, desire and physicality were all too much for a Reds side who still appeared to be stuck in pre-season mode.

The thrill of their Community Shield victory over Manchester City wore away incredibly quickly as Liverpool, whose starting lineup featured six players over the age of 30 for the first time since February 1994, could not match up to the pace of the game.

Klopp opted to give his starting XI five minutes after the break to turn things around, but when that didn't happen, the call was made to Nunez.

The Uruguay striker came on in place of Firmino, who could not get involved whatsoever during his time on the pitch. In fact, his willingness to drop deep almost made things harder for Liverpool, and that became abundantly clear when Nunez came on to do the exact opposite.

A slow start yielded a loss of possession which allowed Neeskens Kebano to hit the post and the passing-up of a chance to shoot in favour of a sloppy pass, but once Nunez settled into the game, his impact became clear.

Stretching the defence and offering a focal point, Nunez's arrival appeared to change the tone of the match. He nearly scored with a nice flick before righting the wrong moments later with another deft touch that, truth be told, has to count more as a deflection after Tosin Adarabioyo's unfortunate ricochet.

Uncertainty in the Cottagers' back line saw the ball hit off Nunez and inadvertedly into the path of Salah, whose routine tap home ensured the summer signing before the first player to both score and assist a goal on his Liverpool debut.

Klopp is right, Nunez does need time to settle in English football, but there is only so long the boss can wait. The margins in the Premier League title race are so fine these days that a slow start could rule Liverpool out of the race before it has even started.

Expect to see Nunez in the starting lineup from this point onwards.

This article was originally published on 90min as Darwin Nunez provides welcome spark to flat Liverpool on Premier League debut.