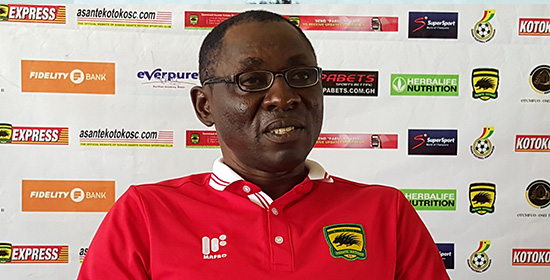 David Duncan is one of the few coaches in Ghana who have had the unique opportunity in coaching Hearts of Oak, Asante Kotoko and AshantiGold.

He has a 14-year Premier League experience and in his latest blog (coachduncangh.wordpress.com) selected his best crops of players including current stars Robin Gnagne and goalkeeper Philemon McCarthy.

Also making the cut is deceased Michael Asante whom we worked with at Great Olympics.

Cameroonian striker Valentine Atem is the second foreigner to break into his team after working with him at AshantiGold.

1.PHILEMON McCARTHY (HEARTS OF OAK): He may not physically possess the stature required for a modern day goalkeeper, but he makes up for that with amazing reflexes. He distributes balls to outfield players with so much precision either with short or very long range delivery of passes. I have lost count on the number of times he made saves that could only be described as miraculous.

2.MICHAEL ASANTE (GREAT OLYMPICS): He had such a good defending ability. He had speed that made it impossible for fast wingers to easily go past him. Not too strong though, but could effectively shield the ball efficiently with his body in very tight corners when the situation so demanded. Had an almost excellent passing ability. His most outstanding attribute was his immense stamina that made him play right back as if he was combining that simultaneously with right wing play. This he did with such flawless ability to recover into position when possession was lost upfield. Sad though that he has passed on. May his soul rest in peace.

4.ROBIN GNAGNE ( HEARTS OF OAK): An expect in tackling without fouling, and this he does by sticking with his man. He also perfects the art of knowing when to get into tackles and when to delay them.An assured winner of headers. Reads the game well with his trade mark occasional long range passing which often finds his attackers and catches opposing defenders off guard.

5.JOE HENDRICKS (ASHANTIGOLD): Though lacked some amount of pace, he possessed the needed grit to tame the most stubborn of attackers. He was usually the backbone of the team, delivering randomly inspirational jestings to lift the team. A mentally tough and determined character.

6.ANTHONY ANNAN (SEKONDI HASAACAS):  Do not be deceived by his diminutive stature, he could not be bullied in the game. Had good ball control even under the most intense of pressure. He hardly gave the ball away. He was hardly out jumped in winning of headers. What he lacked in going past opponents in dribbles, he made up for it with lightening quick one touch and wall passing movement play.

7.OPOKU AGYEMAN (ASHANTIGOLD): Never seen a player do so incredibly well to get past defenders on the wing with such lightening speed and power almost throughout the entire duration of a game both defensively and offensively. It’s easy to believe he had a spare heart. This had always been a potent weapon in the team’s attack.

8.ALHAJI SANI (ASHANTIGOLD): A very influential player in creating threatening attacks, and could thwart attempts by opposing teams to create chances. Like Xavi of Barcelona fame, he could hold on to the ball with an insight to determine when the timing was right to deliver the best and perfect pass. He could be relied upon for goals directly as well.

9.MAHATMA OTOO (HEARTS OF OAK): He simply combined the appropriate blend of skill, power, accuracy, pace, quick decision making on the run with or without the ball. And the most important of all his poaching ability. He was always ready for the slightest opportunity in and around the box for rebounds, tap ins, and any other means by which he could get the last touch in  the making of a goal. He could not be overlooked as well in the delivery of set pieces from within a distance of 30 yards from goal.

10.VALENTINE ATEM (ASHANTIGOLD): Quite a phenomenal player. Put him anywhere, including defense and he was still likely to score.His shooting ability was with such precision that it finds the back of the net or gets goalkeepers to work. One of the few efficiently ambidextrous players almost impossible to dispossess of the ball once he had it under his control through dribbles, shielding or passing as the situation may demand. Very much endowed with natural strength. Was also a specialist in dead ball situations, especially spot kicks.

11.NASIR LAMIN (ASHANTIGOLD): A very mobile player with huge endurance level and power to participate in both defensive and offensive duties. Used both feet with equal precision and efficiency. Had an appreciable ability  to dribble forward and serve crosses to teammates to finish off, but could easily and effectively do so himself as well.