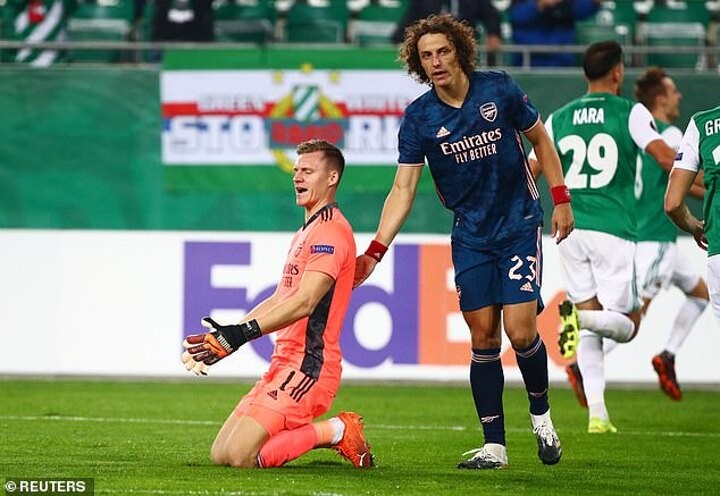 David Luiz has defended team-mate Bernd Leno after his error gifted Rapid Vienna the lead in a hard-fought Europa League tie which Arsenal eventually went on to win.

Mikel Arteta named a strong side at the Allianz Stadion, where 3,000 home fans watched on, with Thomas Partey making his full debut in the Group B opener.

But after a mistake by Leno gifted a goal to Taxiarchis Fountas the Gunners had to rally, with Luiz and Pierre-Emerick Aubameyang on target as Arsenal left Austria with a 2-1 win.

Following a passive first half for both sides, Fountas struck just six minutes after the interval, capitalising as Leno's attempt to play out from the back was intercepted by Ercan Kara.

Another couple of wobbles from the Germany international goalkeeper later in the half presented Fountas with further chances which he failed to convert.

Leno's position as Arsenal's No 1 had already split the fanbase when Emiliano Martinez was sold to Aston Villa in the summer, but Arteta backed his first choice following the win.

Luiz, whose flicked header drew the visitors level before substitute Aubameyang tucked home a close-range winner, also spoke out in defence of Leno.

'I think Bernd is amazing,' he said.

'It is part of our philosophy to build from the back, this is a normal thing.

'You always play to eliminate players from the beginning when you build, then it is going to be much easier for the strikers.

'So, if you count how many times did it go well? But just one he did wrong and this is part of our philosophy.

'He is great and he gives us the opportunity to play from the back and try to help us.'

While Arsenal were considered favourites to win Group B when the draw was made at the start of October, Arteta's side made heavy weather of their first outing.

They host League of Ireland champions Dundalk next week, with Luiz pleased to have already come through a stern test in Vienna.

'It was a difficult game against a fantastic team,' he added.

'They played with a lot of intensity and I think it was good for us to start like that so we can really understand what is going to come for us in the future.

'Well done for them but also well done for us because we kept calm, kept control of the game in the second half and found a way to win the game.'