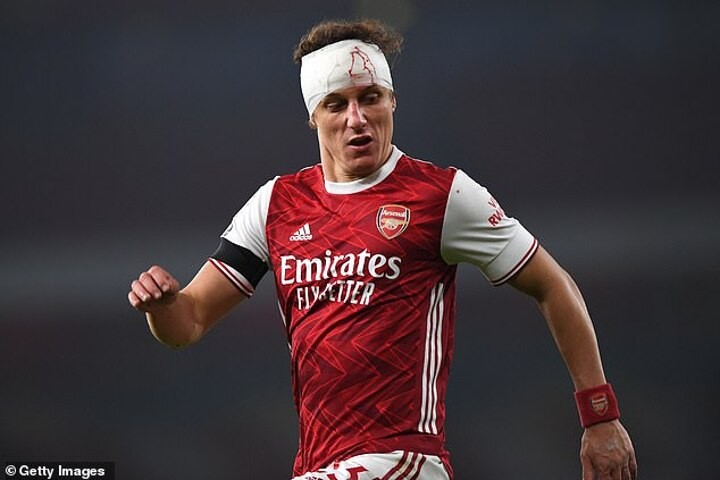 David Luiz has been ruled out of Arsenal's Europa League match with Rapid Vienna on Thursday due to the cut he sustained in a head clash with Wolves striker Raul Jimenez.

Arsenal have come under intense scrutiny for allowing Luiz to play on at the weekend after he was involved in a nasty clash of heads with Jimenez, who has since had to have surgery on a fractured skull.

The club insisted they followed all protocols before sending Luiz, who had blood seeping through a bandage throughout Sunday's game before he was substituted, back onto the pitch against Wolves.

Club doctors visited Luiz at his home on Monday and monitored him closely at Arsenal's training centre on Tuesday before announcing that he would not play any part against Rapid Vienna.

Luiz is said to be in 'good health' but his gash, which required seven stitches, has not yet properly healed, hence a decision was made to pull him from Thursday's squad.

In a statement released on Tuesday, Arsenal reiterated that Luiz had not displayed any symptoms of a concussion and was further assessed at half-time.

As first revealed by Sportsmail, Luiz was also allowed to drive himself home after the match despite the sickening clash of heads with Jimenez.

Arsenal have been widely condemned for their handling of the situation while Alan Shearer has called for the immediate introduction of concussion substitutes in football following the incident.

'This has been going on too long. The protocols in football are not acceptable.

'If he has passed all the protocols, how on earth is he allowed to come back on with a wound bleeding through the bandage.

'It’s been going on far too long.

'What’s to trial about the concussion substitute, why? Just do it, it’s not acceptable.'